Due to COVID-19 social distancing measures, the event themed ‘Isolation & the Writerly Impulse’ and featuring four eminent writers, will happen on Zoom by 3 pm.

The session will feature writers Ogaga Ifowodo, Kunle Ajibade and Akin Adesokan. All of them had been detained and jailed by the military junta of the late General Sani Abacha.

Poet and lawyer, Tade Ipadeola will moderate the meeting.

A former representative of Delta State on the Niger Delta Development Commission Board, Ifowodo is the author of ‘Madiba: A Collection of Poems.’ He was arrested during the Abacha regime for calling for stronger sanctions against dictatorship while returning home from a Commonwealth Heads of Governments Summit in Edinburgh, Scotland in 1997. 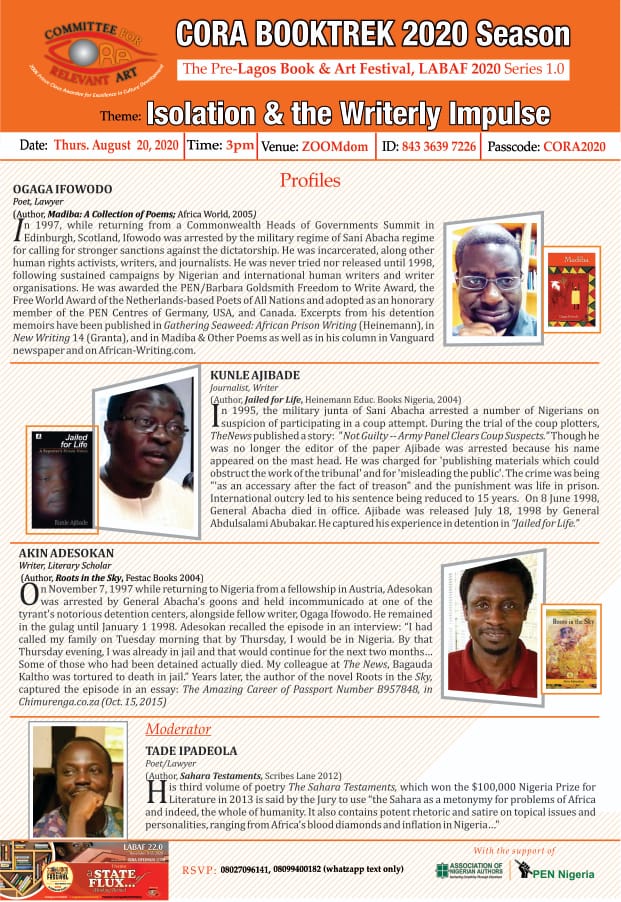 He was incarcerated, along with other human rights activists, writers, and journalists. Ifowodo was never tried nor released until 1998, following sustained campaigns by Nigerian and international human writers and writer organisations.

Executive Editor of TheNews/PM News, Ajibade is the author of ‘Jailed for Life’, his prison experience. In 1995, the military junta of Sani Abacha arrested several Nigerians on suspicion of participating in a coup attempt. During the trial of the coup plotters, TheNews published a story: “Not Guilty — Army Panel Clears Coup Suspects.” Though he was no longer the editor of the paper, Ajibade was arrested because his name appeared on the masthead.

He was charged for ‘publishing materials which could obstruct the work of the tribunal’ and for ‘misleading the public’. The crime was being “as an accessary after the fact of treason”, and the punishment was life in prison. An international outcry led to his sentence being reduced to 15 years. Ajibade was released July 18, 1998, by General Abdulsalami Abubakar after Abacha’s death.

Lecturer and author of ‘Roots in the Sky’, Adesokan, was arrested on November 7, 1997, while returning to Nigeria from a fellowship in Austria. Abacha’s goons held him incommunicado alongside Ifowodo until January 1, 1998. Years later, Adesokan who previously worked at The Guardian and TheNews, captured the episode in an essay: ‘The Amazing Career of Passport Number B957848’, in Chimurenga.co.za

Moderator Ipadeola’s third volume of poetry, ‘The Sahara Testaments’ won the Nigeria Prize for Literature in 2013.

It promises to be an exciting session for literati seeking to gain more insights into how detention fuels writing.

‘Gratitude’ comes from Mozart of the talking drum

Origins of Yoruba-speaking people different from origins of...

READ More  “Literature Can Foster And Express Our Shared Humanity”: Bernardine Evaristo On The Importance Of Inclusive Publishing
Holler Box