No Entry: Which countries are restricting entry of Chinese flyers as Beijing lifts COVID curbs?

After spending three years in isolation as part of its zero-COVID policy, China has announced that it will be fully opening its airports and ports for travel and trade, and come 8 January 2023, it will cancel nucleic acid tests for international arrivals, the need to obtain COVID green codes from Chinese embassies abroad and quarantine on arrival.

All this while it still continues to struggle with a COVID wave, which is putting the country’s medical infrastructure under pressure and causing the public to resort to the black market for drugs and treatments.

Shortly after the announcement, lifting all COVID restrictions for travel, citizens scrambled to make international travel arrangements, with the South China Morning Post reporting that search traffic on travel websites had surged significantly.

However, it seems like Chinese tourists won’t have unrestricted access to all countries as there is a mounting concern in the international community about the COVID-19 surge in China.

India, Japan and Malaysia step up rules for Chinese travellers

Health Minister Mansukh Mandaviya on Twitter said that passengers from these countries would be put under quarantine if they showed symptoms of COVID or tested positive.

The BF.7 variant of COVID-19, which is the primary driver of the recent outbreak in China, was already detected in India earlier. Four persons who contracted the variant — a sub lineage of Omicron BA.5 — in September and November, have since recovered. Experts have assured that India’s COVID-19 scenario will not worsen like that of China. And the authorities are taking all necessary precautions to ensure that India doesn’t see a surge in infections.

Japan, which is a popular destination for Chinese travellers, have also tightened border controls for Chinese visitors. Prime Minister Fumio Kishida on Tuesday said that keeping in mind the rising COVID cases in China, all travellers from the mainland would have to show a negative COVID test on arrival or quarantine for seven days.

The measure will come into place from Friday, just as Japan heads into the New Year’s holidays marked by parties and travel, when infections are expected to rise.

According to an Associated Press report, Kishida said China’s lack of information and transparency about the infections made it difficult to assess and figure out safety measures. There are huge discrepancies between information from central and local authorities, and between the government and private organisations, he said.

“There are growing worries in Japan,” Kishida said. “We have decided to take a temporary special measure to respond to the situation.”

Kishida added that the new measures aim to “prevent rapid increase of infections in this country” and is not intended to stop global movement of people”.

Malaysia, too has imposed new tracking and surveillance measures for Chinese travellers.

According to a Reuters report, even Taiwan announced that it would test inbound travellers for COVID-19 starting January 1 in wake of a surge of infections in China. Taiwan’s Central Epidemic Command Centre said all passengers arriving on direct flights from China as well as by boat at two offshore islands will mandatorily need PCR tests upon entry.

The US has expressed concerns about rising COVID-19 cases in China and has raised questions about the transparency of data.

The officials, in a statement, said America is considering entry restrictions for Chinese travellers coming to their country.

According to BBC, US officials expressed concerns about the COVID surge in China and its “lack of transparent data, including viral genomic sequence data,” without which it would be difficult for health officials to identify any “potential new variants” and further “take prompt measures to reduce the spread.”

The Xi Jinping-led country announced easing restrictions on outbound travel on Tuesday after it relaxed quarantine rules for travellers arriving in their country.

According to South China Morning Post, Beijing also officially scrapped a cap on the daily number of flights.

On the other hand, the National Health Commission announced that COVID-19 will be formally downgraded to a Class B infectious disease on 8 January.

The country has also stopped releasing daily coronavirus caseloads since Sunday. This came after the figures released earlier failed to provide full picture of Omicron’s new variant surge in the nation. A worker in protective gear attends to visitors at the emergency department in Bazhou city in northern China’s Hebei. AP

These restrictions being lifted come after China saw the most stringent zero-COVID policy, with harsh and long lockdowns and keeping citizens indoors for months.

According to US News, protests flared across the nation at the end of November demanding Xi Jinping to step down. Hundreds of people held up blank pieces of paper expressing their discontent and acknowledging the censorship. 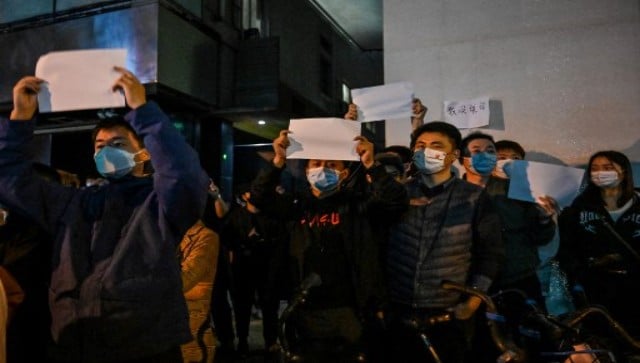 People show blank papers as a way to protest, is seen on a wall while gathering on a street in Shanghai. AFP

The protests came after lockdown rules were blamed for hampering rescue efforts after a tower block in Urumqi engulfed in fire that claimed over ten lives, according to BBC. However, Chinese authorities have denied such claims.

Forced by unusual protests, the president withdrew the policy only to witness the coronavirus outbreak become out of hand.