Chief (Mrs) Taiwo Taiwo loves the company of artistes as she indeed loves the arts and everything edifying.
Last Tuesday she had an opportunity to once again demonstrate her love for and interest in the arts when she hosted a small but smashing celebration on her special day.

Covid19 physical distancing restrictions would not allow this successful, multi-talented businesswoman to throw a big party. But February 16 wouldn’t pass unannounced for that was the day she clocked 70 and the day she unveiled her book, an autobiographical account of her journey through life, aptly titled My Mother’s Daughter…My Journey To Becoming.
Her GRA Ikeja home in Lagos provided the needed ambience for a small, cosy but smashing shindig to celebrate a woman of style and substance. 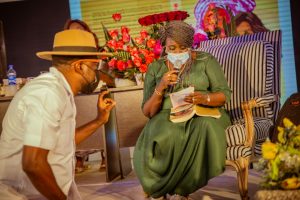 From the prayer service in the morning to the hybrid (physical and zoom) book unveiling, love radiated all around the celebrant, her husband, children and grandchildren. For a titan of the business world that she is, it was not unexpected that her long-term friends and fellow amazons like Dr. (Mrs) Stella Okoli and Chief (Mrs) Eniola Fadayomi would play prominent roles in honouring her. But it was more of an afternoon of the arts, as various artists made the day quite memorable. 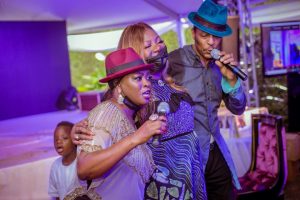 The legendary dancer and singer of the Shalamar fame, Jeffrey Daniels, was the surprise act of the day, dishing out great tunes from his group that rocked the world in the 70s and 80s and a couple of Michael Jackson’s popular songs.
At almost 65, Daniels who has since made Nigeria his home, has still got the moves. 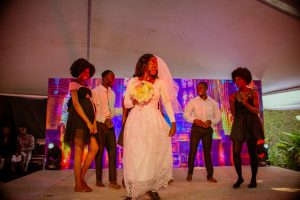 He had a ready collaborator in Yinka Davies, with whom he had served on the judging panel of Nigerian Idols musical talent show, in taking the guests back in time to the good old Shalamar days. Both were an item on the cute little stage inside Mrs Taiwo’s garden. Incidentally, Daniels had performed at the nite club in Maryland Hotel which Mrs Taiwo founded and managed when the Shalamar were on tour of Nigeria in the early 80s.
However, Yinka Davies was obviously the angel of the day, dishing out melodious tunes that soothe and edify.
It was her first outing after losing her son to a debilitating illness last month.
With Mrs Taiwo, she was in good company having been through such bereavement too when her daughter, Abioye, died in a car accident in 2002.

It’s in her daughter’s memory that she instituted the AART of Life Foundation and has personally devoted much time to counselling and giving succour to women in similar situations. 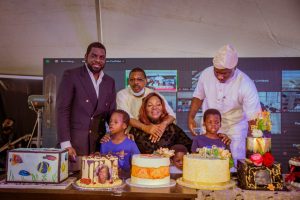 The delectable singer, Niyola, whose acting skills will soon be unveiled on the big screen, sang the birthday song while DeClassical Theatre Group delivered a brilliant 20-minute performance to capture Mrs Taiwo’s trajectory.
There were other performances on zoom with deft coordination and support from two of the closest thespians to the celebrant, Mrs Joke (Silva) Jacobs and Kunle Afolayan. 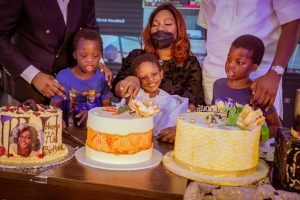 Mrs Gbemi Shasore, whose Quramo Publishing printed the book gave a nice insight into the autobiography  while a respected journalist and author, Mr. Kunle Ajibade, reviewed the book, which clearly captures the very essence of the exemplary life of the celebrant and how her mother played a significant and irreplaceable role in making her the brilliant, industrious and successful woman she has become today.

For Falola, more laurel for an overflowing chest

For Falola, more laurel for an overflowing chest

Chris Ifatoye Theberge: “There are different dimensions of...

“When we know better, we do better