Soul Music Can Heal Us, And Ife’s Music Comes To Mind

On a calm weekday at Nnamdi Azikiwe University, Awka, before the era of social distancing, Ife walked up to me and asked to talk for a while. This happened in 2018. She discussed with me about her plan to study the music of her native town, Umuawulu in Awka South Local Government Area of Anambra State. I felt happy because at that time I needed a female singer in my band who will be committed to contributing to Igbo musical Renaissance. Seeing her perform severally, I had no doubt that Ife was a star, the type that will shoot right from the roots of African culture. I do not think I did much to help her, except that I watched Ife move from performing at the concert series of the Ichoku Ensemble to creating her own concert. I got into the beautifully decorated hall of Five Star Food and Restaurant, Stock Exchange, Onitsha, for the Ife and You concert and I took a bow for a girl who is out to do something the society will not forget. She simply took a great step ahead!

The Ife and You concert which held at Onitsha on the 23rd of February, 2020 was a major step in the right direction to the materialization of Ife’s musical dream which she had structured painstakingly in her first degree research work. Thus with her gown, she met the town in the most ravishing manner. At this time when most of us are at home isolating to keep safe from the Corona Virus, I appreciate more the role musicians like Ife who bring us together to enjoy music, exchange ideas, meet people and renew our lives generally, play to keep us “safe”. We are keeping safe now but we all know that there’s something we are missing. I can recall that in the February edition of the Lunch-hour Concert of the Department of Music Nnamdi Azikiwe University, Awka, which I direct, a student of the department, Chinemelum Favour who is a strong fan of Ife relished the experience of the Ife and You concert so much that she had to perform one of Ife’s singles entitled Oh My Love. Listening to this student perform Ife’s song got me thinking that Ife called us together; to impart that seed she had collected from the roots; to enliven those musical experiences that she naturally embodies and those she had gathered from the aged and experienced traditional musicians of her home town, Umuawulu community of Anambra State. On a different situation, I heard a female voice echo Ife’s Nwannunu Nta in a playful but tender manner along one of the corridors of the Faculty of Arts building, Nnamdi Azikiwe University, Awka. I waited to see who it was. I was not surprised to see that it was the aforementioned Chinemelum Favour. I cannot go on recounting how Ife’s music has become an accompaniment to peoples leisure or happy time. Indeed, it appears that anyone who gets to love Ife’s music sings it a lot because I confessed the same experience in an interview conducted by the media team after the concert.

Really, sitting in my corridor where I do my studies during the day, I realize that the memory of this concert is still green in my heart. Ife opened the concert with a gracious walk into the Hall. The music was not just heard from the speakers, an ardent music listener will appreciate that she was revealing a journey, and ultimately that these songs came straight from her African soul. Ife is not out to repeat tradition, she is making her own pop and soul sounds too but has most of her songs as adaptations of traditional Igbo music, recreated in her own style.

During the first phase of the concert, Ife opened the show with Oh My Love which culminated in a standing ovation. Egwu, Nwa, Nwanne (which she performed with the Ubo-aka, the Igbo thumb piano), Little Lady, and Nwayo, were the next songs she performed. A break was observed and she opened the second phase by paying tribute to the veteran Late Chief Osita Osadebe by rendering Osadebe’s Ebezina. Black Bird, Omenana, Nwannunu Nta, Ifunanya, Ozo (which she recorded with Umuobiligbo), and Awele were the rest of her original compositions which she rendered to the audience. Nwannunu Nta, an adapted traditional Igbo music, was performed in a call and response form which connected the audience with the performers like in the days of yore when our mothers and fathers were out as boys and girls playing under the gaze of the moonlight. The rendition of that song was also fused with superb dramatic movements of a drummer, Elochukwu Aninta, who advertised the Hero Beer brand. This was a delight to watch. 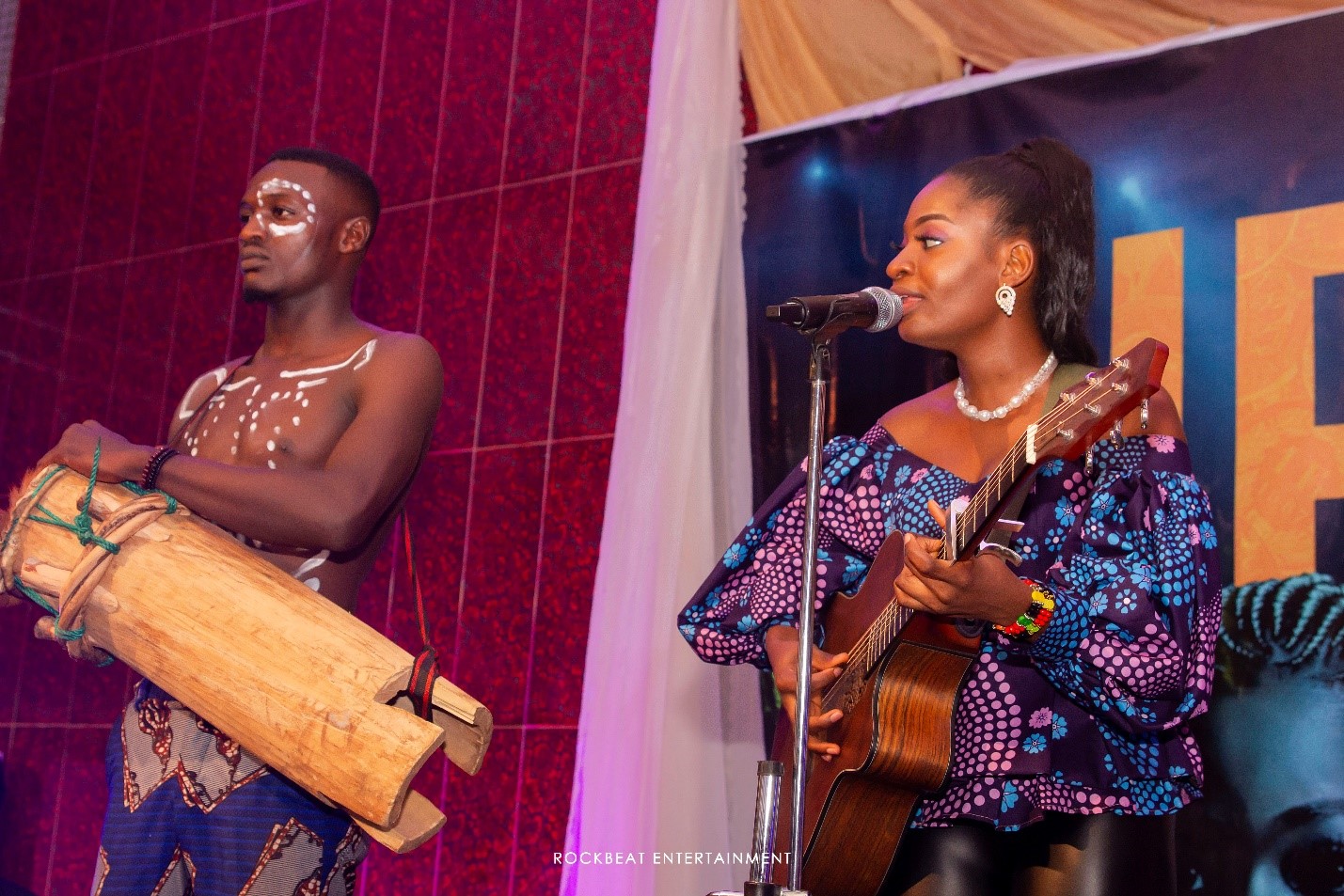 Ife, performing Nwannunu Nta in a dramatic style with Elochukwu Aninta on the drums.

The song, Omenana, which means “tradition”, spontaneously got almost everyone standing, dancing, singing along and greeting each other as if they were asked ab initio to do so at that point in the show. The atmosphere of conviviality that the song, Omenana, sparked when it was being performed speaks of the undying appeal of the people towards the traditions of the Igbo-Africa. Ife’s music simply sparked the expression of love for culture which was already in those members of the audience. Ife also connected with the soul of the city by dedicating Ozo to the victims of the Ochanja market fire outbreak. Ozoemena in Igbo implies, “may such not happen again”. To sing this music was most thoughtful, to say the least. 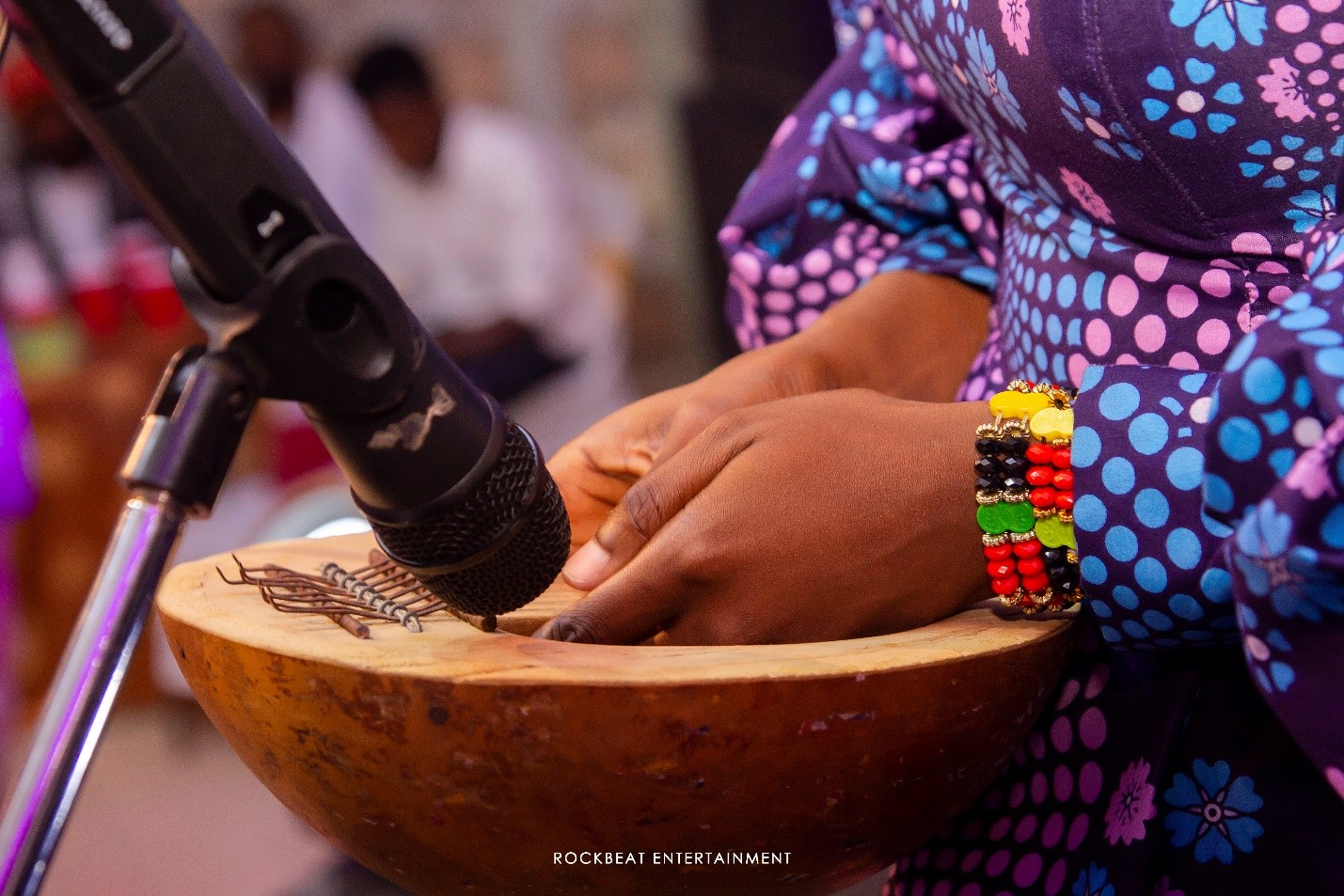 It was Ife’s curiosity that led her to ask questions about traditional Igbo music. She explains her interests thus: “I wanted to make modern soul music from the lessons I was going to learn from the traditional musicians I understudied. The recordings of the songs followed and official presentation of the songs online. But for the concert, my aim was to connect with those who have been listening to my music through a live performance. Onitsha as a city needs to be projected consistently as a viable creative space for young people and this projection is also what my concert sought to contribute to.” When asked what her aspirations are for the future. Ife pointed that she will like to move from the local stage to the international stage. “Touring the world and touching lives with my sound is my goal. I want to be in the soul of everyone who loves good music.”

Ife who has always been intrigued by Onyeka Onwenu, Nelly Uchendu, Miriam Makeba, Angelique Kidjo, and Nina Simone, to mention but a few, seem to have come to inspire another generation of African music lovers. These big names can be likened to the shoots of the Iroko of African music. It is only from this same mighty tree that Ife shoots out and this has been the tradition of African musical rebirth. Ife who was nourished by the earlier veterans is beginning to nourish a new generation with her albeit tender but scintillating voice, not to forget her inspiring messages. Shortly after her concert, a girl in her 14s wrote Ife through Instagram direct message (DM) in the following words: 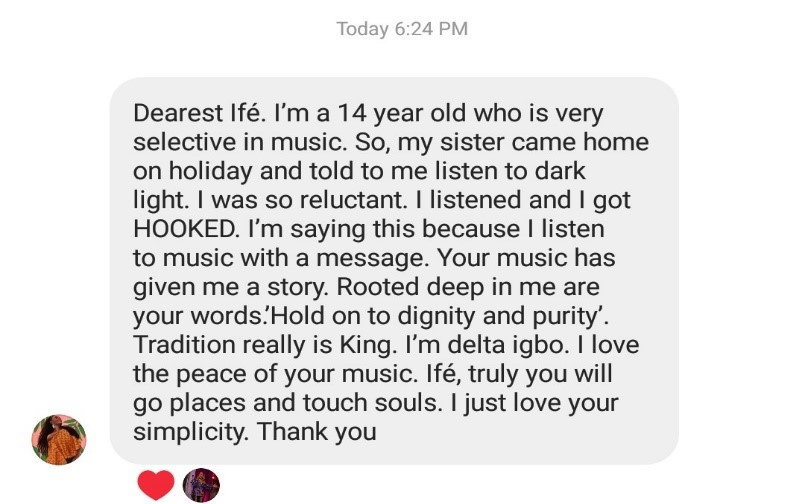 It is safe therefore to say that truly, Ife represents the hope in Igbo cultural Renaissance and should be part of events that promote Igbo and African culture. She was once known as Mercy Michaels when she emerged the first runner up in the first Unizik Next Supper Star, a tough competition which was organized by the SUG of Unizik in 2015. Her trail of excellence can be seen as gradual and consistent. She was a gospel artist as can be felt from the texture of her voice, ardent Penticostal Christian, and had little experience of the Igbo musicianship except for the songs her mother sang to her as a child, the music of Onyeka Onwenu, Nelly Uchendu amongst others, which she grew up listening to. She has not stopped being a Christian, nor has she stopped singing gospel music, but she has chosen to build a career in the road she has traveled less as a growing child. She is now set to journey almost forever on that part she is convinced that leads home. Ife represents many African souls seeking to journey home, seeking to have a feel of the African ideals and to represent these ideals. It takes calling to discern such journey, courage to begin it and tenacity to remain undeterred. Ife in her performances and her music has revealed that she has discerned this calling properly, summoned the courage to begin, and she is committed to taking African music round the world as much as her wings, our urges, and providence can take her.

Ife’s band is called The Tribe with Nwegbe Victor Chinonso as the Band Captain and Keyboardist, Other members of the band include Nwankwo Cyprain Onyekachi who played the bass guitar, Onyekwena Chika Nnamdi played the guitar, Obi-Okpala Kachimdindu Kamtochukwu played the saxophone, Metu Onyedika Chikambere was on the drums, Alex le Grand Momo on the maracas while Favour Nnamani and Rex Obinwa served as the backup singers. Emizbeatz and Afro Banks are the producers who got Ife’s debut EP, DARKLIGHT, made. Ife’s manager, Kenechukwu Ibedu who works round the clock to ensure that Ife gets the best shots is really worthy of mention. A friend of mine who attended the concert opined that every young person should get himself a Kenechukwu Ibedu. A generalization, yet a statement made to mark the diligence of a committed and efficient manager.

There were other hands who helped to ensure that the concert was of good standard. They include Onyedikachukwu Ibedu, Ife’s artistic director and visual artist, Nonso Iredu of Rock Beat Entertainment, Ifeanyi Umeaku who served as utility manager, Elochukwu Aninta who was in charge of protocol, Henry, the Production Manager, Mr. Paschal, the sound Engineer. The event was partially sponsored by Hero with Nice Obum as the Hero representative in attendance. Ijele Tea and Declan Wine also offered partial sponsorship to the event. Tunde Dawodu, Ife’s mentor gave the closing remarks. Tunde Dawodu is a renowned music promoter and African cultural ambassador who is based in Lagos and Calgary, Canada. He came from Lagos to attend the concert and confessed in his closing remark that he was fulfilled. 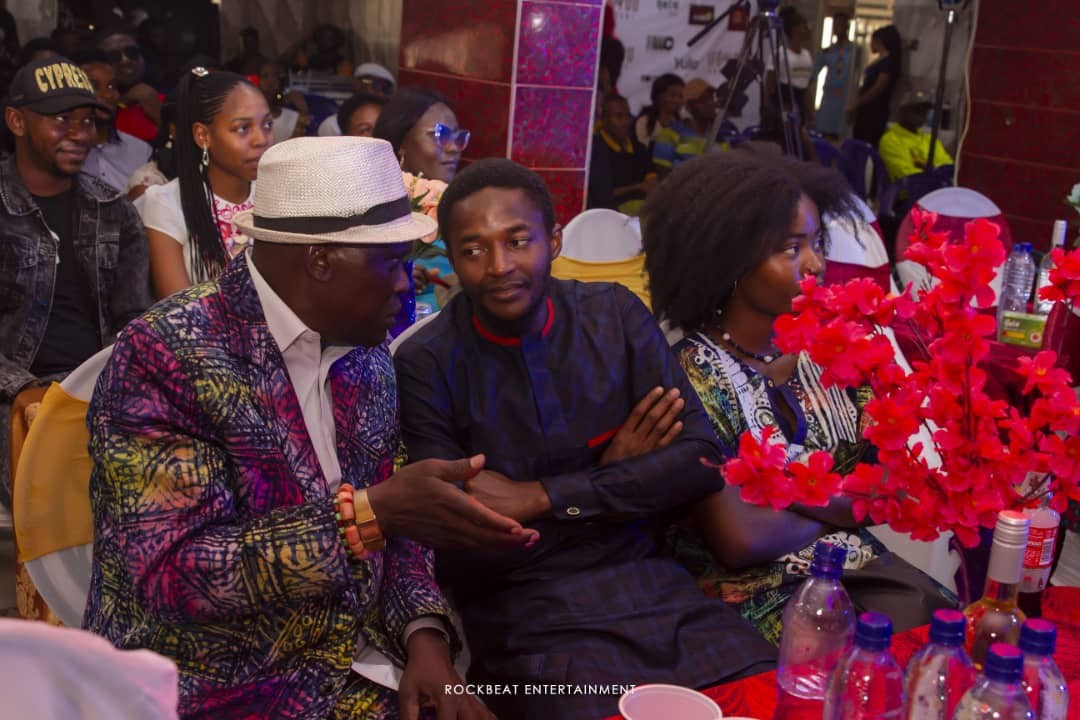 Tunde Dawodu, Gerald Eze, Chinelo Mbamalu amongst the audience at the Ife and You concert.

Ife contributes in her measures to the growth of modern African music and musicianship. This can be felt once one listens to her music. The imports of Ife’s music are still relished by those who attended the Ife and You concert. Indeed, the confessions people have made of the concert as well as on Ife’s DarkLight EP on Facebook, Instagram and twitter has shown that Ife’s music is rich and transcendental. Interestingly, Ife has not arrived yet, she is only still shooting out to the skies and leaving ravishing flashes of different colors; from the roots, up to the skies. And this is the point one may say, that the sky is her starting point. At a time like this when we are all in isolation, it is apt to listen more to creative soul music. Soul music heals and inspires, and Ife’s music comes to mind. In case you missed the concert, Ife’s DarkLight EP which contains most of the songs she rendered in the concert is worth the while. Ife is active on the following social media platforms: Facebook @Ifemusiq, Instagram @Ife_musiq and Twitter @Ife_music. 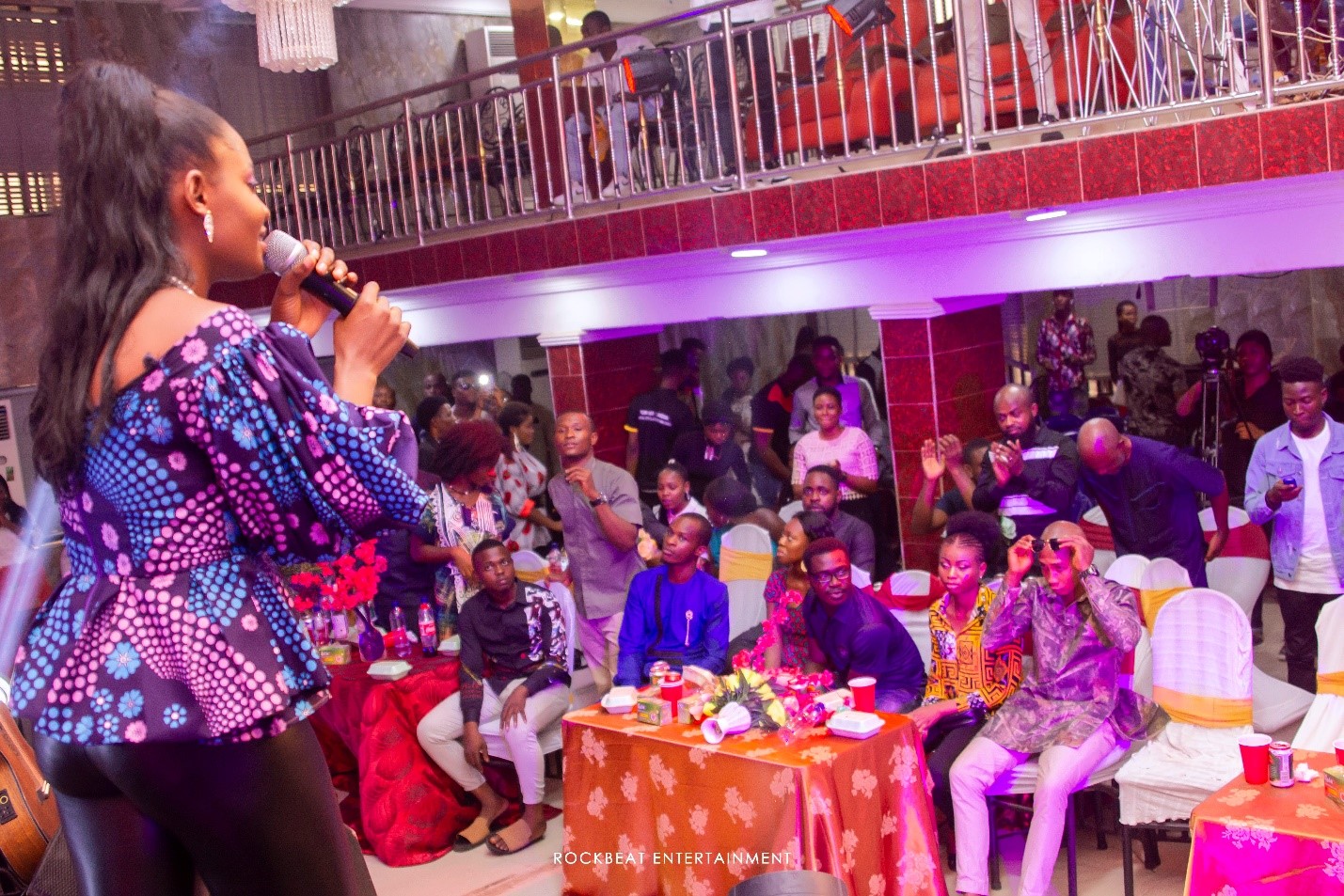 Ife’s rendition of Omenana moves the audience to dancing.