by The Culture Newspaper November 4, 2019 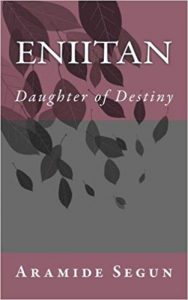 If you start from the back of the book here are the words you will first encounter. These words should be your compass to a modest attempt at a review

“Eniitan, a bronze albino woman in her early twenties, lives with her elder sister, Abike, brother-in-law, Tunde, and their twins, Taiwo and Kehinde.

The fragile peace of the home is shattered one morning when Eniitan wakes up to find her big sister has made changes to her birthday plans. This seemingly innocuous act sparks off a devastating chain of events that exposes a brutal past and threatens to tear the family apart. Eniitan’s love-hate relationship with her sister is aggravated by the hostility of her brother-in-law who believes that she is a re-incarnation of her dead grandmother – Iya. Her uncanny resemblance to the late departed, reputed to be a powerful herbalist in her time, makes him fear her. He wants her out of the house and out of their lives. Eniitan herself is haunted by the spectre of her grandmother and cannot seem to escape the terrifying images of death, which constantly appear to her. One night she vanishes without a trace in mysterious circumstances and all fingers point to her brother-in-law’s involvement but, is he responsible? Her disappearance throws the family into turmoil until the truth is uncovered.

This story of a dysfunctional Nigerian family reveals the complexities of life in a society where social prejudices, superstition, religion, politics, and love make or break the human spirit.”

It was Rick Kleffel who stated in a 2014 article that “[t]he literature of fear is not as hard to find as you imagine. Literature itself began as a means of dealing with our fears of the unknown. Our first stories were those of gods and monsters, both with little regard for mere human lives.” In line with Kleffel’s postulation, I have always accepted that literature of any genre written by creative minds and especially that written by fellow Africans brings me closer to the stories being told and allows me to keep asking myself deep existential questions. The type of questions came to the fore as I plough the pages of text, songs, and brief dialogical exchanges between characters that think like me and take decisions I would have taken too. The stories allow me to constantly examine the life we as a people have lived and places we have been, as wisdom becomes part of our earthly possessions. I cannot dispute the subjective fact that reading makes us wiser and allows us to share in the dark parts of other people’s daily existence. After all, Yoruba people say the antics of a mentally deranged person may be pleasant to watch but no one would like to have such a person as a child or that of a distant relative. At another level, no one can be everywhere and no one can experience all that needs to be experienced in life, so peeping through text into the lives of fictional characters must be an added advantage.

As I read the 312 page book written by Aramide Segun, I am filled with blessings that the troubles (or challenges if you prefer) I have encountered in this brief period of my existence are nowhere near those of the protagonist in the novel and that of her family. Yes, it is a work of fiction but who reads a novel like this which focuses on the very minute details and not feel its reality. The story of Eniitan and her sister goes hand in glove with a Time publication (2006) that concluded that one is raised by parents, but “it’s your brothers and sisters who really shaped you.” In this narrative, the main dramatic conflict and its resolution revolve around two sisters who are linked by parental blood but are thrown apart by the blood of Jesus and all that blood stands for. As I turn page after page, the tension between the sisters heighten due to conflicting values and things come to a head when they can no longer trust each other. Other family members caught up in this conflict are soon faced with challenges of their own as the story unfolds to reveal the thin line that exists between life and death. Death, one of the few characters unnamed in the novel, stalks both the young and the old, leaving the reader in suspense as to whom its next victim will be. I must quickly point out that the story is not about death but about the vicissitudes of family life placed against the backdrop of local politics. The shenanigans of the decadent class of politicians are skillfully woven into the plot.

Eniitan – The Daughter of Destiny in terms of space maintains almost a perfect unity. The story unfolds in very manageable locations. It is not one of those novels with the characters spread all over the place. The geography of this writing is no doubt the city and its margins. Kinseko may be a metaphorical marginal city it still has all the pathologies of any big city with a preponderance of broken people and their plethora of troubles. For instance, the ill-treatment of unfortunate members of the lower class is exemplified in the portrayal of the house-help – Taibatu. The poor and the weak are always the losers in the story of life. They are the ones who live their lives in fear and are always consumed by fear. In the novel, the house-help walks away with a bundle of joy but leaves behind a bundle of Naira notes that would have helped her start a new life.

If you are a lover of dark stories or stories of dysfunctional families, you will find this book a very fascinating read.

Wedlock of art, technology at Alpha One

Elesin Oba: The Rebirth Of An Era

Woman King is worth watching: but be aware...

In The Law is an Ass, Adedokun curates’...

‘Collision Course’ – a reminder of #EndSARS and...

Blood Sisters: So Far, So Mo