Despite the spike in the number of active COVID-19 cases in Nigeria, controversial singer, Azeez Fashola, popularly known as Naira Marley, headlined a concert in Abuja on Saturday defying the interstate travel ban and social distancing protocols aimed at containing the spread of the coronavirus.

The 26-year-old singer and Oprah shared videos of themselves aboard a private plane and on arrival in Abuja despite the interstate travel ban.

The event’s fliers indicated that the show was meant to be a drive-in concert with tickets sold between ₦20,000 and ₦250,000.

However, a video clip, reportedly from the concert which surfaced on social media showed Naira Marley performing before a crowd without any form of social distancing or wearing of face masks as stipulated by the Nigerian Centre for Disease Control (NCDC).

The concert has sparked outrage from social media users, comparing the concert to Funke Akindele’s house party for which the singer was also indicted and later pardoned. 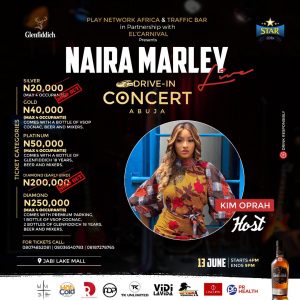 “So, Naira Marley and KimOprah did a life concert in Abuja yesterday and the place was fully packed in the middle of a pandemic. People generally do not have regards for the law or their own lives. Funke Akindele’s own happened not quite long ago o.. Hope we hear from Aso Rock,” a Twitter user wrote.

Another Twitter user commented: “Naira Marley did it first with Funke Akindele. Sincere there was no stringent punishment for that, I know he’ll repeat it, and voilà he did it again in Abuja overnight. Lawless citizens, lawless government, lawless nation.”

The FCTA stated that the concert which held at the mall was in contravention of the directives of the Presidential Task Force on COVID-19.

The FCTA wrote via Twitter: “The FCT Ministerial Task Team on COVID-19 seals up Jabi Lake Mall indefinitely for violating Presidential Task Force’s directives on the ban on public gatherings as part of measures to contain the spread of the dreaded pandemic in the territory.”

But it was silent on whether the organisers, owners of the hall and the artistes involved will be prosecuted for flagrant contravention of covid-19 safety protocols.

With number of infected persons close to 15,000 nationally, Lagos and Abuja have witnessed a spike in the number of fresh infections attributable to lax implementation of safety protocols meant to contain the spread of the deadly virus.

From the pangs of pandemic, African creatives emerge stronger

Mohbad Almost Killed Himself During Rift With Naira...