Musician and activist, Seun Kuti, who is a son of the late Afrobeat legend, Fela Anikulapo Kuti, has revived his father’s political group, Movement of the People to drive the call for better governance in Nigeria and as well as an end to police brutality.

Seun made this disclosure while delivering an address on Tuesday at the Kalakuta Museum, his father’s former home, in Ikeja, Lagos. 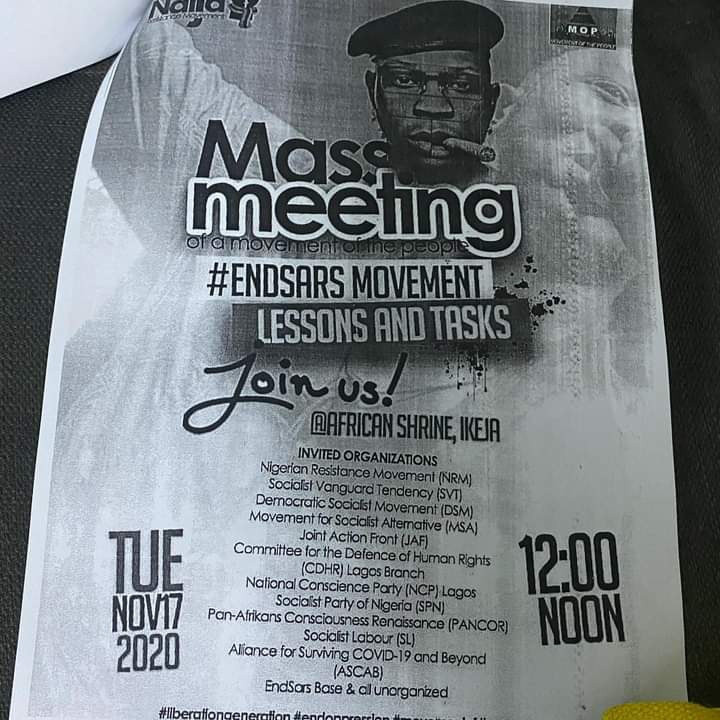 Like his elder brother, Femi, Seun was part of the lead voices at the last #endsars protests against police brutality. “The idea is that we liberate the Nigerian people. I want to guarantee you that this movement will be the movement to cultivate those minds, those ideas. The pan Africanist and socialist foundation,” he said on Tuesday.

“The movement cannot survive without the Nigerian professionals and the middle class. We have to do the work now to begin to engage those of us in society that have been completely left behind and that have been overlooked.”

The original Movement of the People was set up by Fela in 1979 when he intended to run for the presidency under its banner but was barred by the Nigerian Government from taking part in the election.

Seun’s decision to revive his father’s political legacy was not without controversy anf tension. Armed policemen had on Tuesday morning restricted movement in and out of the African Shrine in Ikeja to prevent the meeting from taking place there.
The policemen mounted strategic locations across the area while their vans were parked in front of the relaxation spot.

He however vowed to continue with the meeting which was later moved to the Kalakuta Museum.

In a post on his social media handles on Monday, the 37-year-old Afrobeat musician had called out the government for clamping down on citizens’ rights to freely associate.
He had alleged that the government called Yeni Kuti, his eldest sister, to warn against the meeting billed for 12:00 pm on Tuesday.

Seun also accompanied the post with a copy of the letter from the Divisional Police Officer of Alausa, Lagos who kicked against the proposed meeting.

“Yesterday the government called my eldest sister @yeniakuti and threatened to close the shrine if I hold my event there tomorrow and also sent a letter to back it up.
“I respect my family’s decision not to hold the event as planned but I will still go ahead with all the other organizations to launch The Movement of the People tomorrow and start our political resistance to the tyranny of this oppressive regime.

“This is a meeting, just a meeting of organizations and they are basically banning the right of association. Why are they afraid of the people organizing? What is democratic about this act?
The last time we tried to launch, the government quickly called curfew and this time they have used threat but you can’t stop the will of the people,” he wrote.

How Artiste Impersonated Wizkid And Allegedly Made ₦30m...

Mike Okri Rolls Back The Years With Self-Titled...