The public announcement was concise “FEMRITE, the Ugandan literary advocacy organization, has a week of literary activities running from October 26 – 31, 2020. This Women Writers’ Association is a literary advocacy group that focuses on developing and publishing women writers in Uganda and the East African region. The Kampala, Uganda-based organization was founded in 1995 and it organises training for, events and publishes many of Uganda’s leading women writers.”

However, the venue for this virtual meeting was somewhere in Uganda. The specific location was irrelevant because participants as usual logged in from different time zones and locations. Dr. Wale Okediran was in Accra, Ghana, the moderator Dr. Dorothey Atuhura, a lecturer at Kymbogo University, Kampala, Donald Molosi is an actor/ writer based in Botswana. This is the nature of meetings these days. We sit behind a tiny camera and speak to the world. The time here in Florida was about 9:30am and who knows what time it was elsewhere. Distance and time notwithstanding, Dr. Wale Okediran kicked off the event with his very well prepared keynote address. He spoke on how to empower female writers by exploring other means of turning their talents into money. He had a number of useful suggestions that were well received by those in attendance. Professor Akachi Ezeigbo, the multiple award-winning author sent her opinion to all participants in support of Dr Okediran’s presentation. “Wale, thanks for a stimulating lecture.” In addition, she quickly sent her greetings to a certain Hilda. 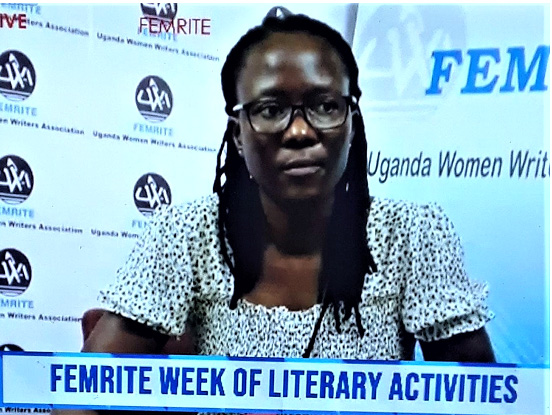 The question by Mr. Jahman Anikulapo took the participants from the virtual world to the world of African technocrats.  He wanted to know what the African Union could do for African writers in helping their vocation in relation to how other regional bodies such as European Union and the UAE did for their creative intellectuals. The response that came from Dr. Okediran was on another side of the road but still we learned from what PAWA was doing and how he as the new Secretary General was settling down in his duty post.

Yours sincerely repeated his worn out song that writers should not be left with the burden of producing and marketing the books. I suggested that an African Books support Agency is now an imperative. I then asked when will Africa embrace the idea of agents who can take over the burden of marketing and promotions? As an added income stream, I suggested that an agency on the African continent should start thinking of producing posters from poetry books in collaboration with fine artists.
The second session had Dr. Ali Tucker Lichtenstein, the chair, Board of Directors at Women’s Wisdom Art; speak about her organization and what they do to stay afloat and relevant in times like these. “Women’s Wisdom Art is dedicated to transforming the lives of women from all backgrounds by inviting them to engage in a diverse community dedicated to participating in the arts. The images and words women create to express their lives empower themselves, their families, and our entire community.”

The introduction of Donald Molosi as an actor, writer and playwright who debuted off-Broadway in 2010 brought another dimension to the presentations. He spoke about literature and its ability to connect souls.

“In literature, you learn about the dynamics about how we live, how we express ourselves, how we experience life. The important bit in literature is that we are able to connect with each other in different ways, in really different ways. Sometimes this connection could be through different songs, it could be from poems, or even through a newspaper article, which we read that we could relate to. So I think what literature has done for us at a time like this is the fact that we are Human Beings, that sometimes we find ourselves low, and at other times we find excitement. In thinking through how this works for us as Human Beings, we are able to connect with each other. In a way, this is done spiritually and in a way that we all think that everyone goes through the same situation. We can thus understand each other because when I read your story or read about the troubles someone goes through I can understand that I am not alone in this journey…we need to build sites of resilience. I think that is the power of literature because I think what COVID times have done is that it has disrupted what we have always considered to be the normal.  Writing thus ends up in a world that forces us to think though the abnormal and think through how this affects our lives”

The event continued but other duties called. I allowed the curtain to fall on this segment of the festivity but I was sure FEMRITE, which started right, was on the path of great success. They had the right sponsors, the right panelists, and an audience that had the time to enjoy what they had on offer.