The Rand Merchant Bank Nigeria Artists Graduate Program was established as part of the bank’s fifth anniversary in June 2018. However, the level of professionalism and creativity displayed by the artists made RMBN institutionalize it such that annually, the best student in the art department of universities across the country are eligible to join the program for three years.

At the event which also doubled as the bank’s Client Appreciation Night and launch of its new Custody product, exciting works by the six artists participating in the program were displayed in an exhibition curated by Oyindamola Fakeye. The artists were: Akintomide Aluko, Ayanfeoluwa Olarinde, Washington Mosadioluwa, Elizabeth Ekpertorson, Saheed Wahab and Iyunola Sanyaolu.

Speaking at the occasion where singer Wande Coal and the Alpha Dance Company performed, CEO, RMB Nigeria and Regional Head, West Africa, Michael Larbie further reiterated the bank’s commitment to the arts. He stated that “RMB support artists and organizations to develop the creative economy. We support the arts because we have always believed that the creative economy has the potential to generate economic growth, employment and trade. And we believe that the growth of this sector will enable many more Nigerians to engage effectively and profitably in the broader economy.”

Larbie added that “our brand alignment with creative and intellectual excellence presents a unique opportunity for the ‘Art of Business’ to embrace the ‘Business of Art’, providing an empowering platform for extra-ordinary talent to be showcased.”

Also speaking, RMB’s Marketing and Communications Manager, Yemisi Ogunbodede explained that “at RMB, we believe art, culture and creativity have been the glue that binds together, not only hearts and souls but entire societies and nations. While art and culture can illuminate our inner lives and enrich our emotional world, it has a wider, more measurable impact on our economy, health, wellbeing, society and education.”

The exhibition proper featured three works each by the participating artists while Asidere had six. Ekpertorson, a Fine Arts graduate of the University of Port Harcourt whose works were paintings ‘Earth’ (Chaos), ‘Earth (Order) and ‘Man’ gushed over her participation in the program. She disclosed that she sold two out of three works exhibited last year and commended RMB for the initiative that has further empowered her.

Sanyaolu, Aluko and Saheed spoke in a similar vein. They lauded RMB for the program, disclosing that the mentoring received from Asidere have been helpful.

According to Sanyaolu, “You end up getting more than you bargained for with Mr Asidere. He offers valuable pieces of advice for a young art career trying to grow. It’s been a great time working with him, and the program itself is a great opportunity for young. It’s real encouragement”.
Like the younger artists, Asidere also commended Rand Merchant Bank, noting that “it has been sheer ingenuity that has made artists survive this topsy curvy economy.”

Asidere, who expressed belief in the ability of the younger artists to flourish and forge successful careers further praised RMB, stating that, “any corporate organization or individual that supports artists is doing us good. Look at the exhibition here, the catalogue, space and lighting are good. What more can one ask for?” 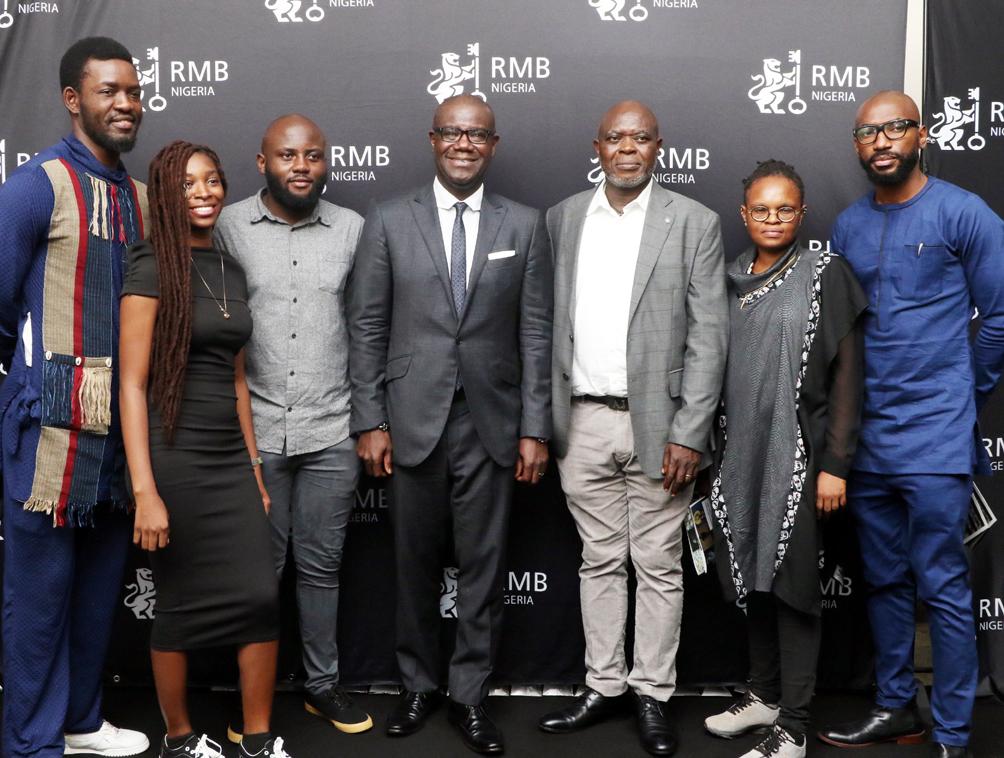 The Birth Of A Terrible Beauty