From Kole Odutola, literary gift for the culture

From inception, Dr. Kole Odutola has been part of the dream and the modest success of The Culture Newspaper (TCN) as a niche news media wholly dedicated to the Arts, Tourism and Creative Industries.

By compiling some of his published articles in TCN into a publication, just before the newspaper’s first anniversary, Dr. Odutola has invariably further fulfilled one of TCN’s cardinal objectives, which is to ceaselessly engender conversations around the creative landscape of Africa in general and of Nigeria in particular, while also encouraging documentation of discourses on culture.

It may not be obvious that the publication of this collection, ‘Going Down Memory Lane: Collection of Articles Published in TCN’, has a direct bearing on the author’s 60th birthday anniversary.
We may not know for sure as Dr. Odutola’s is hardly the type that draws huge attention to his earthly anniversaries.

But a fitting, even if coincidental, tribute is this collection, nevertheless, that it is being unveiled at a time that the author has discovered diamond on the sixth floor of life.

This collection, therefore, is a labour of love, which deserves celebration for the book itself and indeed the author.
It is a publication for anyone, anywhere who seeks deep perspectives about different aspects of culture, society and even how the arts have faired since the advent of Covid-19 from the writings of a passionate textual documentarist.

Over the years, from his days at the University of Benin throughout his almost 40 years as a multi-talented professional, Dr. Odutola means different things to different people.
A poet, photographer, literary critic, culture advocate, scholar and author, he has worn several creative toga that exemplify his roving, perhaps restless, creative spirit.

However, in this collection, the reader will have a fresh opportunity to discover the essential, vintage Kole Odutola anew.
Going Down Memory Lane…will serve for the reader as an interesting journey with the author on a vast, adventurous cultural landscape.

From his first article on September 30, 2019 when TCN made its debut, where Dr. Odutola wrote about ‘Lagos Through Stories’, delving into the many names and shades as well as the real and fictionslised narratives around Nigeria’s iconic commercial city, the reader will discover and appreciate the depth of knowledge the author displays as indeed his personal stake in Nigeria’s literary and creative space.
Significantly, the title of the publication resonates throughout the publication with a series of ‘down the memory lane’ treatise spanning several months.

In all these, one encounters the author as a historian, a chronologist, a global citizen and a wordsmith who pours out his heart so that certain aspects of our story will not be forgotten.
There is the ‘Going Down Memory Lane: My First Day of Every New Year in Lagos of Old’; ‘Going Down Memory Lane: Do Nigerians Still Read For Leisure’ which generated interesting debate on all the social media platforms of TCN and ‘Going Down Memory Lane: 1996 Before Nollywood Became A Global Brand’ in which Dr. Odutola used a January 2020 London conference on Nollywood as a basis for revisiting some part of the humble beginnings of the new Nigerian Cinema.
From the Jos conference that gave birth to the National Film Policy of Nigeria in 1992 to the brilliant Initiative of the Lagos Film Viewers Forum at the Goethe Institute/German Cultural Centre, Lagos in 1996 (first anchored by Dr. Odutola before filmmaker Victor Okhai took over) the author makes a compelling case for why the past is as important as the future of the motion picture industry.

Beyond the intriguing voyage to the past, the author’s robust engagement with the current realities is also evident in his reports on a few important zoom meetings and webinars, especially for those tilting towards tourism.
The reader will encounter him in raw poetry and in poetic essays as evident in ‘The Poet Fled As In Ran Away From Home.’
Here, the author’s wit comes to the fore, to the delight of the reader. ” I have a licence to laugh at myself,” he writes in this article, ” so that when others become the object of my comedy, they will not point accusing fingers.”

However, he is not immune from betraying his emotions as he does in this same article when he recalls the failed Coalition of Nigeria Artists (CONA), an idea he mooted in the early 1990s towards having the leadership of all creative industry associations come together under one umbrella for better engagement with each other, government and other stakeholders.

Broad and diverse, this compilation also includes his writings about love and creatives on Valentine’s Day; and another one where he explores the uniqueness of cities like Ibadan, either in a travelogue format or as a cultural melting pot deserving of the prying eyes of an arty pundit.
His experience as a street photographer in another article further feathers his cap as a robust writer with rich experiences.

In compiling all these interesting articles into a book, therefore, Dr. Odutola creates a good vibe and at the same time sends out a strong message about scholarship and great journalism that captures niche interests.
The impact will endure and will validate TCN as a platform for buoyant cultural discourse, with Dr. Odutola himself as a frontliner among its cherished contributors. 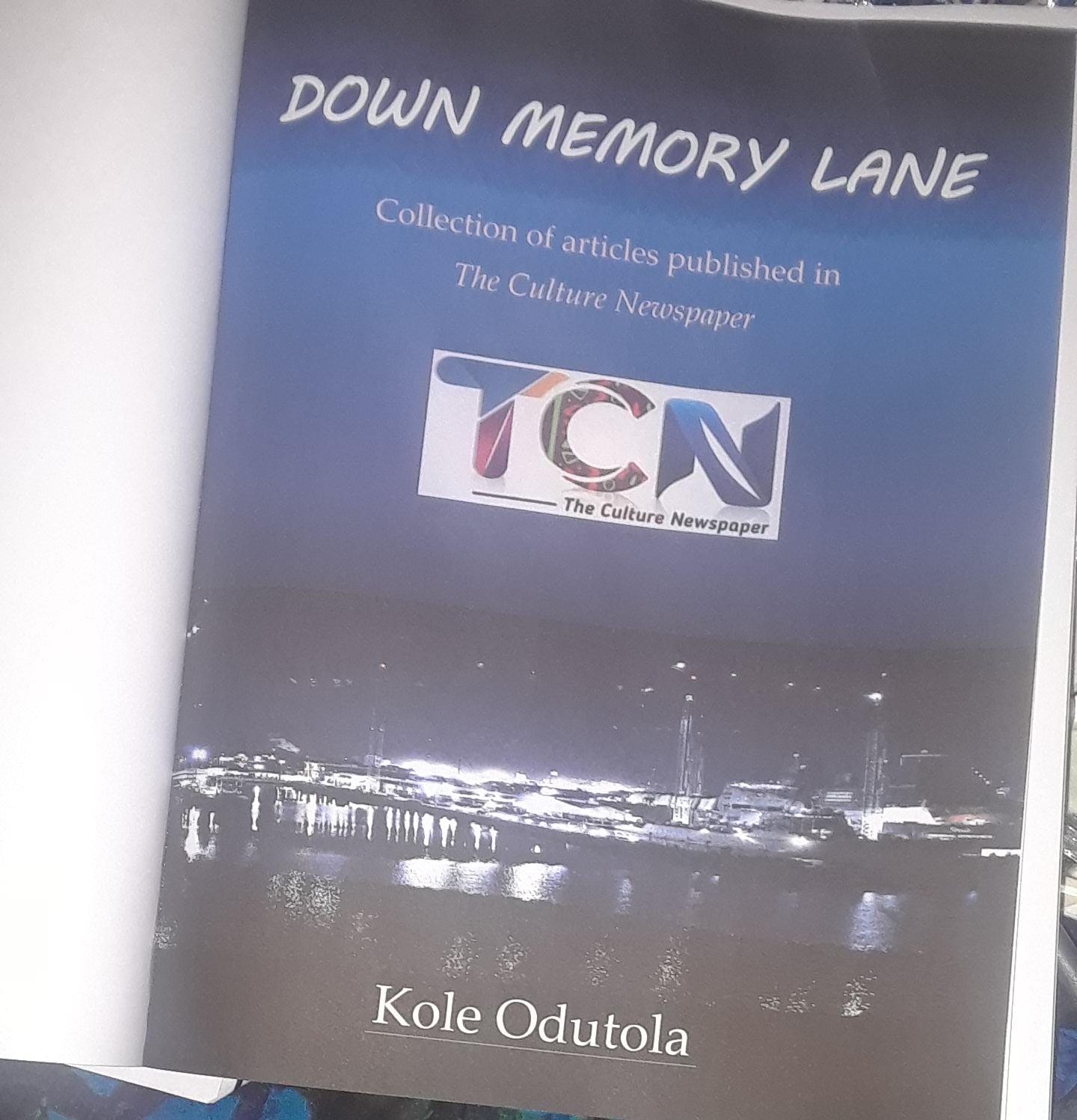 publisher of TCN, wrote this as Foreword to Dr. Odutola's book

Nollywood Actress, Eniola Badmus, opens up on being a victim of body shaming

The Womanist Reader Creates an Online Library of...