A forthcoming Marvel collection featuring Black heroes will include a new story by Nigerian-American fantasy and sci-fi author, Nnedi Okorafor.

Her story takes place on October 20, 2020 – the day soldiers of the Nigerian army reportedly opened fire on demonstrators at the Lekki Toll Gate in Lagos.

The collection, titled Marvel’s Voices: Legacy #1, will also include stories by Tochi Onyebuchi and other authors. 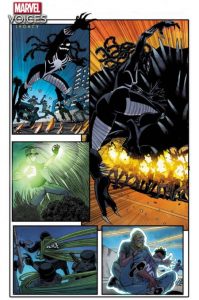 Okorafor’s follows the character Venom, with art by Chris Cross and colors by Rachelle Rosenberg.

“The #EndSars protests in Nigeria were a powerful flashpoint in 2020. They began with a call for the disbandment of Nigeria’s corrupt Special Anti-Robbery Squad (SARS) and grew into an energized demand for social justice. The #EndSars protests sent gigantic ripples all over the world and it’s fitting that those ripples would make it to one of Marvel’s universes…and it was a little therapeutic to imagine what would have happened if an alien symbiote named Venom and a certain woman named Ngozi had been there on that nightmarish night of October 20, 2020,” she said in a press release for the collection.

For Onyebuchi, his story focuses on the character, Domino, with artwork by Ken Lashley and colors by Juan Fernandez.

A long-time fan of superhero stories, Onyebuchi said: “[t]o now be able to count myself as a Marvel creator is to join Mount Olympus. Or, at least, the first step in my visa application to Krakoa.”

With ‘The Persistence of Time’ Artpedia Launches New Gallery Space