Vogue speaks to the founder of Lagos fashion week about how she’s tackling the country’s unemployment crisis with a new textile training programme.

With Kenneth Ize being shortlisted for the 2019 LVMH Prize and Maki Oh’s Amaka Osakwe appearing on the New York Fashion Week schedule for the past eight years (Orange Culture’s Adebayo Oke-Lawal presented his SS20 collection there too), Nigerian designers have cemented their strong presence in the ‘Big Four’ fashion capitals. 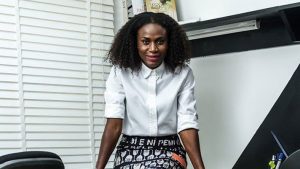 Reviving the ‘Made in Nigeria’ moniker

“Everyone comes to Lagos Fashion Week to experience the collections and see the talent and creativity,” she explains. “But for a country like Nigeria, and a continent like Africa, it’s important that the creativity feeds back into our ecosystem. Where are Nigerian designers sourcing the fabrics from and who’s producing the collections? They’re not telling an authentic African fashion story if it’s designed in Nigeria and made elsewhere.”

Up until the 1980s, Nigeria’s cotton and textile industry was the largest in Africa, with up to 180 mills employing more than 450,000 people, according to Cornell Alliance for Science. As other countries began to produce garments at half the cost, Nigeria increased its imports; as a result, its own textile industry withered. In 2002, the Nigerian government banned textile imports to protect its own ailing industry.

“It just makes sense that the whole production chain, from sewing machine operators and pattern cutters to supervisors and technical support benefit,” Akerele points out. “There is the potential to create hundreds of thousands of jobs, and a pool of skilled garment manufacturers for designers.
Otherwise designers have to either look for tailors or train people up themselves, which is quite a burden for someone just starting out.”

Akerele has worked on several pop-up stores for Nigerian designers with retailers such as Browns, Moda Operandi, MyTheresa, Selfridges, Okapi and The Shop at Bluebird, but she says: “There wasn’t a sustainable way for them to produce their collections and meet the demands of retailers until SHFT was established.”

Creating jobs in Nigeria—Africa’s most populous nation, where according to Trading Economics, 25 per cent of its 200-million population are unemployed—is paramount. Although in its infancy, SHFT has trained more than 600 people through its two-phase programme: first, an eight week 9-to-5 course, and then some attendees are invited back for a further two months of intensive training.

Attendees are paid above the national minimum wage of $83 per month, receiving between $100 to $500 depending on the job in hand, and the programme is funded through partnerships with Nigeria Export Promotion Council (NEPC), Lagos State Employability Trust Fund (LSETF), Industrial Training Fund (ITF) and Nigeria Employers Consultative Association (NECA), to name a few.

But out of the success of SHFT, new challenges arose. “We were producing more skilled workers than the existing workshops need right now,” says Akerele, so she quickly set about finding a solution. “We started working with the NEPC, who helped us find a new facility that houses about 150 sewing machines. Together we’re implementing leadership training, so people who come through SHFT will think like entrepreneurs. They’re already working together to set up small-scale production hubs.”

Although resuscitating Nigeria’s textile industry—and, in the process, addressing the country’s unemployment problem—may seem like a Sisyphean task, Akerele’s optimism has been spurred on by a recent study by SheTrades, as part of the International Trade Centre. Based on figures from the Nigerian Bureau of Statistics (NBS), results showed that contribution of textile, apparel and footwear to national GDP was up 78 per cent between 2010 and 2019 (Q1), making it the second largest contributor to the manufacturing sector in Nigeria.

“It’s an incremental improvement in the grand scheme of things, but a step in the right direction nonetheless,” says Akerele, pointing out that the manufacturing sector overall contributes less than 10 per cent to Nigeria’s total Gross Domestic Product (GDP). “The idea [of SHFT] is to create real social and economic impact; to provide people with tools that can help put food on the table. That’s what drives me to do what I do. Fashion really can change lives in Nigeria.”

What we want to achieve with ‘Moremi The Musical: Reloaded’ – Ooni

Soludo Advocates ‘Made In Nigeria’ Clothes As Daughter...

The world bought more champagne than ever last...

‘This is one of the worst Vogue covers...