He came at me like none ever has, with an inimitability and elan all his own. He was an elegant flourish and gift to my home, myself and my wife, on a soft afternoon that is permanently exprin our minds. Seeing an icon, like Sunmi Smart-Cole, for the first time is like seeing someone like Muhammad Ali, or the president because inspite of never having had the privilege and pleasure of a prior meet, a certain familiarity is undeniable. His photo essays, his documented musical adventures, his hair, the contours of his face, his smile which bestows such a powerfully benevolent warmth, are all imprinted in one’s mind with the force of the familiar. There are not enough ways to adequately express the surreal experience of having an icon one has read about since one began one’s sojourn in the world of literacy, just walk into, walk into? Nay, burst into my apartment like a beam or ball of light, brimful with energy and charm and charisma.

“Sit here, I’m going to give you a haircut!” He said, peremptorily. That was one haircut I couldn’t get away from. So, I sat with stoic obedience like IBB, Bobby Benson, and so many others, not unlike himself, who’s genius, talent, vision, and energy, gave Lagos the culture and the colour it become famous for in its heyday of the roaring sixties that we recognize today when we call it the Centre Of Excellence.

Like Muhammad Ali, Sammi Davies Jnr and other wildly gifted souls, modesty wasnt then, nor is it now, Uncle Sunmi’s strongest suit. Like other greats this was a convention he of necessity had to dispense with; he didn’t just play the drums, he blew his own trumpet too. And with good reason. As he talked with the compelling ease and awesomeness of a raconteur of the highest order, I wondered how my domestically mediocre head compared in his mind with those historically iconic heads. But what Uncle Sunmi lacked in modesty he amply made up for in generosity; he gave of his time, his experience, and his money, with surprising ease considering that these were such hardworn pearls in a world that held tightly to its valuables. And so I knew my head was no less than the great heads that had sat for him before me, at least to him. That is a testament to a temperament greatly tempered by no middling generosity of spirit and soul. 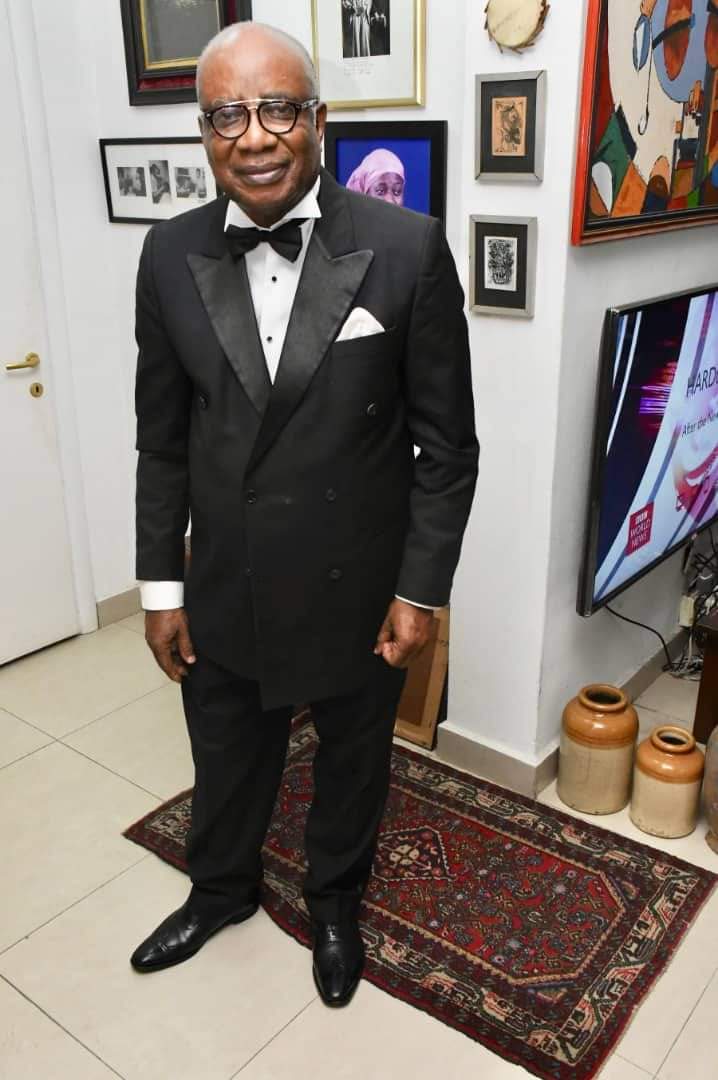 If Lagos has a soul it’s loci would be Sunmi Smart-Cole , and other birds of the same feather, an aviary of not many birds.

Just as Shakespeare reminded us that there is no science to plumb the depths of being from the human face, let me now remind you that there, similarly, is no art to fathom the extraordinary strands of character, experiences and comprehension, that come together to produce an extraordinary talent or genius; in Sunmi Smart-Cole, however, greatness is more easily predicted with the magical benefit of hindsight. There is a theory of excellence or genius propounded by Malcolm Gladwell in Outliers that says that when you add aptitude, attitude plus 10, 000 hours honing a particular skill, you become a Bill Gates or a Michael Jordan, in the given field.

Sunmi is an Outlier in a few fields. This is the phenomenon we are struggling to comprehend. I sum it all up by saying that the gentleman is quite simply a Visualist Extraordinaire.

At age 15, he was an elementary school teacher.

At age 17, he started training as an architectural draughtsman, and subsequently designed, among others, the country home of the late Sierra Leone’s Prime Minister, Sir Albert Margai.

In the 1960s, as a Soul music drummer and jazz percussionist, he was a founding member of the Soul Assembly.

1967, his Yaba barber shop “Sunmi’s Place”, was a trend-setting centre for the fashionable Lagos elite.

1972, he went to the U.S.A where he worked as an electronic drafter and technical illustrator.

1976, his strong visual sense made him embark on a photography course at Foothill College, Los Altos, California.

1978, December, he was invited by the National Council for Arts and Culture to mount an exhibition at the National Arts Theatre, Lagos.

1982, he returned to Nigeria to continue to work to support his new interest. Since then, Sunmi has consolidated his position, both as a professional photographer of international standing and leader of the field in his own country.

1983, he became the first photo editor of the Guardian Newspaper.

1990, The Sunmi Smart-Cole Gallery of Photography (probably the first in Africa) was opened in Yaba, Lagos.

1991, His first book, “The Photography of Sunmi Smart-Cole”, with foreword by Nobel Laureate Wole Soyinka (in black and white), was published by Bookcraft Ltd., in collaboration with Daily Times of Nigeria.

1993, Smart-Cole’s second book, “A Pictorial View: The Foreign Policy Landmarks of the Babangida Administration” (in colour/black and white), was commissioned by the President. It was published in July, of that year.

He who finds his vocation in life has found a very good thing indeed. Uncle Sunmi, auto-didact, man of many parts, found his vocation early in life and has, to this day, at a sprightly 78, continues to bring instruction, joy, and pleasure to countless lucky people the world over; to this end he has held over 30 exhibitions in five continents.

What we want to achieve with ‘Moremi The Musical: Reloaded’ – Ooni