A popular protest to end police brutality and engender lasting reforms has drawn out Nigerian artistes, stars and celebrities in an unprecedented manner.
For the past one week, Nigerians, mainly youths, have been on streets in major cities of the country and abroad calling for an end to police brutality.
The movement, which started as a campaign on Twitter in 2017, is aimed at the Special Anti-Robbery Squad (SARS), a dreaded unit of the Nigeria Police Force accused of harassment, unlawful arrests and detention, extortion, extrajudicial killings and torture, among others. 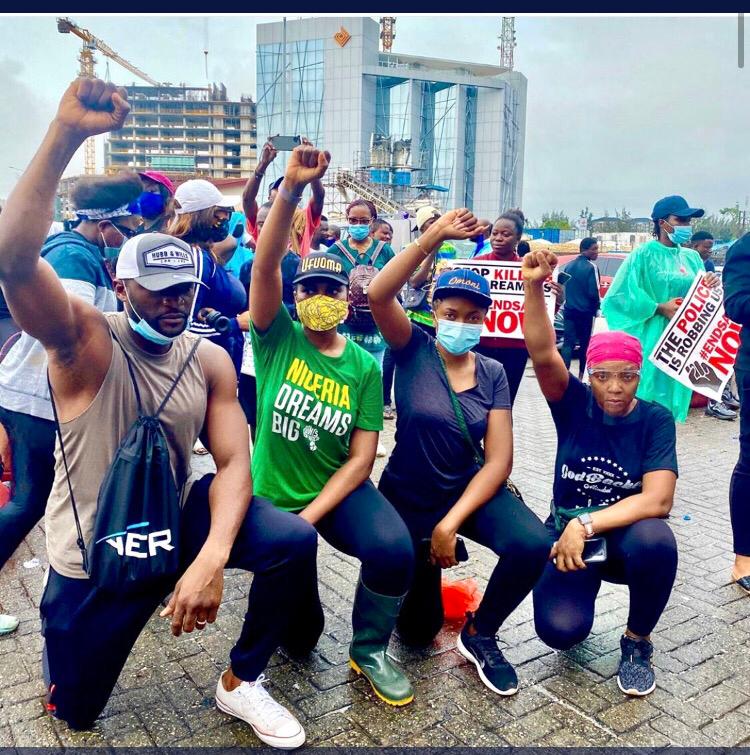 Personal experiences, pictures and videos have been shared online, inciting renewed calls for the abolition of the notorious police unit after a viral video of operatives of the unit reportedly shot and killed a young man in Ughelli, Delta State and allegedly fled the scene with his vehicle – a Lexus SUV.
As at last weekend, the public outcry had generated over 28 million tweets.

The #EndSARS movement has however become a global conversation with both local and international celebrities amplifying the voices of aggrieved young Nigerians. The hashtag trended on No 1 on Twitter on Monday and has dominated engagements in most social media platforms.
While many have lent their voices via social media, others were seen showing solidarity with protesters on the streets.

“This has gone long enough and now we must take action! I’ll be leading a protest to #ENDSARS on Thursday, October 8th 2020,” Runtown said on Twitter on Sunday, October 4. 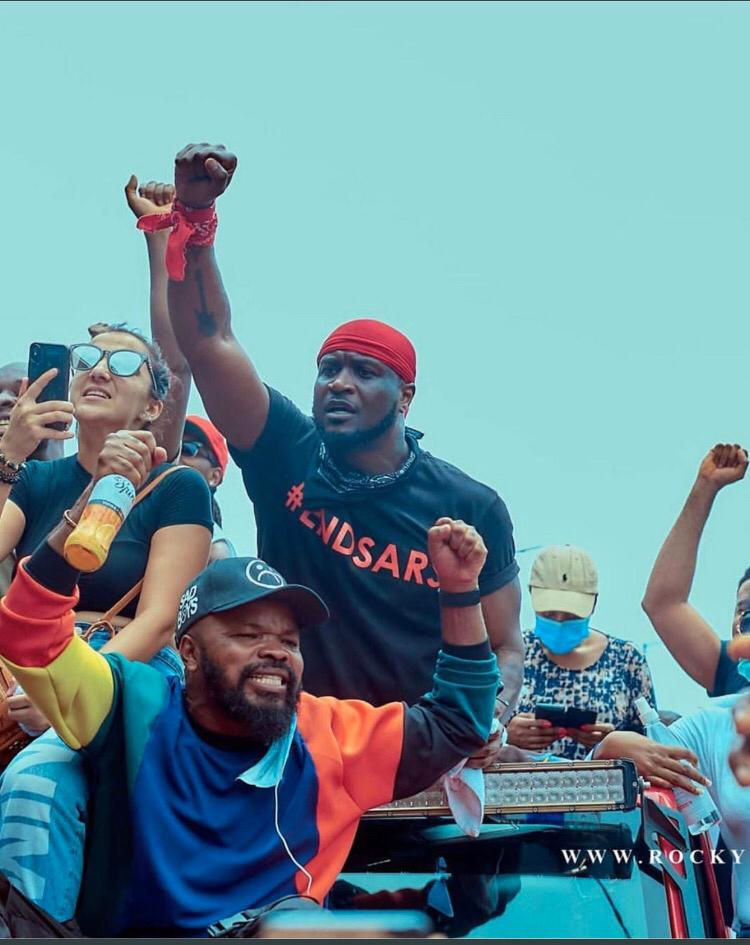 “They MUST listen to us, they MUST make/effect REAL and VISIBLE changes! Empty promises won’t work this time!!!

“Let’s all come out to peacefully reach out to our “Elected” leaders beyond social media!!!”

On the mainland, artistes, social media influencers and comedians teamed up to voice their disapproval of the brutality meted out to young Nigerians.

Alongside other social media personalities, online comedian, Mr. Macaroni spent the night outside the gates of the Lagos State House of Assembly in a bid to get the Speaker of the House to address the protesters’ demands.

By Wednesday morning, the Lagos protests have drawn the most celebrities. Doris AbdulKareem was on hand to lead one of the protests in Ikeja with his evergreen popular song, Jagajaga, on everyone’s lips.
With him was Dede Mabiaku who educated the youths at the Alausa end on the historical importance of popular protests and how the rank and file of the Police stand to be the biggest beneficiaries.
Actors and several nollywood stars were not left out of the movement. 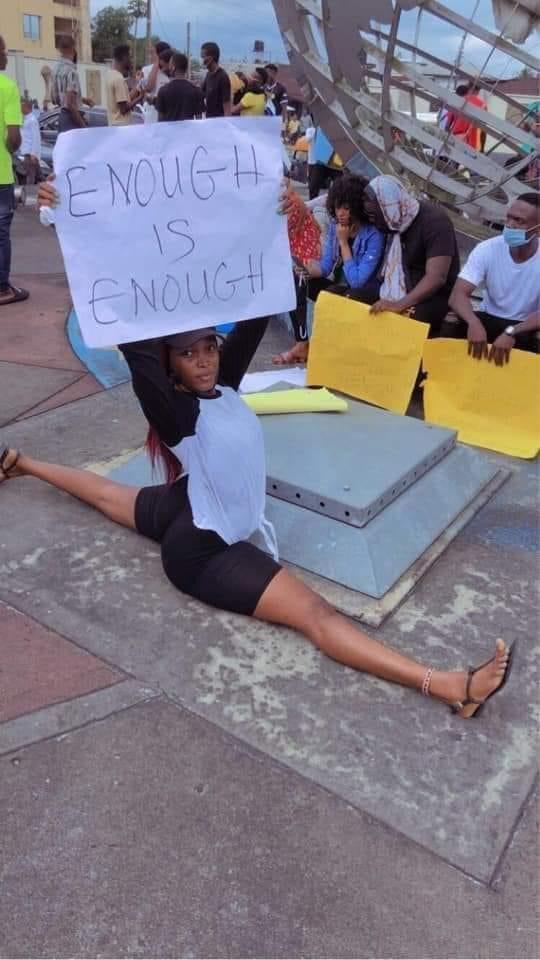 Abuja
On Sunday, October 11, Davido joined and helped secure the release of protesters arrested on the streets of Abuja as the protests continued in several parts of the country despite the announcement of the dissolution of the police unit.

On Monday the music star also visited the Inspector General of Police to relay the demands of the protesters which included psychological evaluation and adequate training of the unit.
With him at the Abuja end were D’banj and Ubi Franklin, among others.

Ogun
Femi Kuti and his son, Made, joined the #EndSARs protest at the Akute/Ajuwon/Alagbole area of the state. They reportedly stopped the arrests of several protesters by the Police.

Adekola tweeted: “Let’s change the narrative so our children won’t suffer the way did. All these struggles is just for a better Nigeria 🙏🇳🇬❤️

“We can’t be silenced! ✊🏿✊🏿#EndPoliceBrutalityinNigeria #SarsMustGoNow,” the PH-based artiste tweeted.

“I have a lot of questions to ask, and we must get answers before we leave .. we need answers.. we come in peace!!! END SARS AND FIX EAST. #endsars #fixeast,” Phyno tweeted.

Oyo
Nollywood actress, Toyin Abraham, was spotted leading a protest on the streets of Ibadan, alongside colleague, Muyiwa Adekola, barely twenty-four hours after twitter users dragged her for promoting her film amid widespread #EndSARS protests.

Toyin said in a tweet: “I am more than my movies, I am an instrument for change and a destiny implementer. You can do this. love you all. #EndSARS”

London
On Saturday, October 10, Nigerian artistes, Wizkid and Mr. Eazi, who were not in the country when the #EndSARS demonstrations began led other Nigerians in London to protest against police brutality.

“We are not scared to speak,” Wizkid told the gathering. “For Nigerians youths, don’t let anyone tell you you don’t have a voice.”

For Afrobeats singer, Burna Boy, who was also in London and was accused by compatriots on Twitter of “not walking the talk”, he attributed his silence to his mother’s recent surgery and painful recovery. Besides this, he stated that he had been working assiduously behind the scene and has donated billboards to assist with the campaign.

“In my opinion, abolishing [SARS] is a definite first step but we cannot afford to stop there,” he said in a statement.

He deployed #EndSARS billboards across major cities in Nigeria while declaring his support for protesters by announcing a charity to help those who were harmed or arrested during the demonstrations.

Accra
As calls for an end to police brutality in the country intensify, Nigerian rapper, Zlatan, who was caught up in Ghana, marched on the Nigerian High Commission in Ghana alongside fellow countrymen in solidarity with the #EndSARS protesters on the home front.

“Scrapping SARS is not negotiable. Police brutality MUST end. I got my people in Ghana to lend their voices to the #EndSars campaign #EndSarsNow,” he tweeted.

Meanwhile, with the foreign media further amplifying the voices of protesters, many non-Nigerian celebrities have begun to pay attention to the wailings of young Nigerians.

It took less 72 hours before foreign celebrities began to lend their voices in solidarity with the protesters.

Here are some of their comments culled from Twitter:

The youth in Nigeria deserve good leadership and guidance. This situation is tied to many other issues. Please lend your attention to this pressing problem! #EndSARSImmediately #EndSarsProtests #EndSARS #EndSARSProtest – British-Nigerian Actor, John Boyega

I stand with my Nigerian brothers and sisters to end police brutality, the government must answer to the peoples cries #EndPoliceBrutalityinNigeria – American rapper, Kanye West

My heart is melting after reading what is going on in Nigeria…#EndSARS #EndPoliceBrutality” – Canadian-American Singer, Celine Dion

After doing a little research I would like to speak out against what’s going on in Nigeria right now. Their pleas to #EndSarsNow IS VERY REAL. I have so much love for my Nigerian fans and it’s so hurtful to hear whats happening. – American Singer, Trey Songz

#EndSARS NOW #ENDSARSNOW I just started reading up on this travesty taking place in Nigeria. If you have more info to dispense in the replies I’m all ears – American Rapper, Chance The Rapper

This if For my continent. For my relatives!!!! For humanity. Cannot continue this every day everywhere!!!! #EndSarsNow – British Singer, Estelle

World is fucked up & the people that are supposed to serve & protect are often the biggest problem smh. #EndSARS – South African Rapper, Nasty C

2Face, Wizkid, Others to perform at Felabration2020