Any first time visitor from Nigeria to George Town, Penang may be forgiven if he or she thinks s/he is in Lagos. The similarities are just too striking.

As a first time visitor to Asia via Malaysia for the first time recently, it was an eye-opening experience to visit George Town, Penang as it is a very welcoming city that is developing right before our eyes. As an aft buff from Nigeria, West African who lives in the United Kingdom, one of first reactions was that of surprise at how similar colonial George Town, Penang, felt to life in Lagos, Nigeria. Aside from the expected similarities due to geography such as the tropical climate and vegetation, I came across several unexpected commonalities. 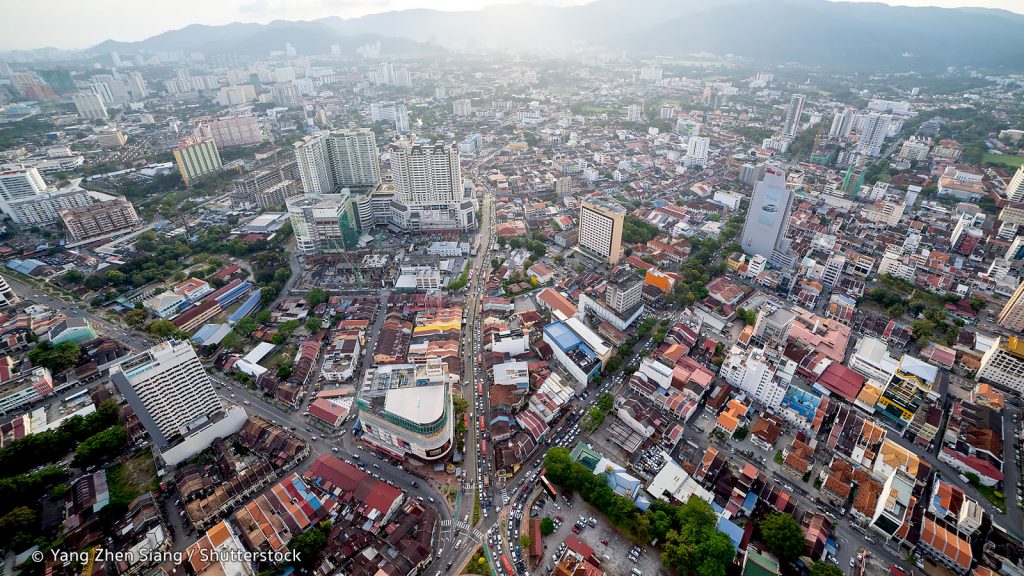 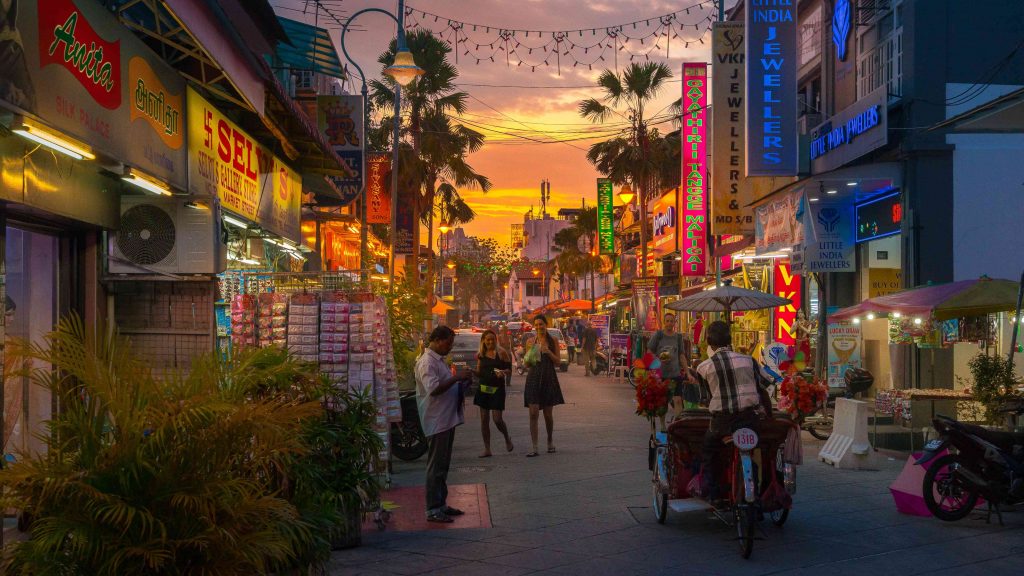 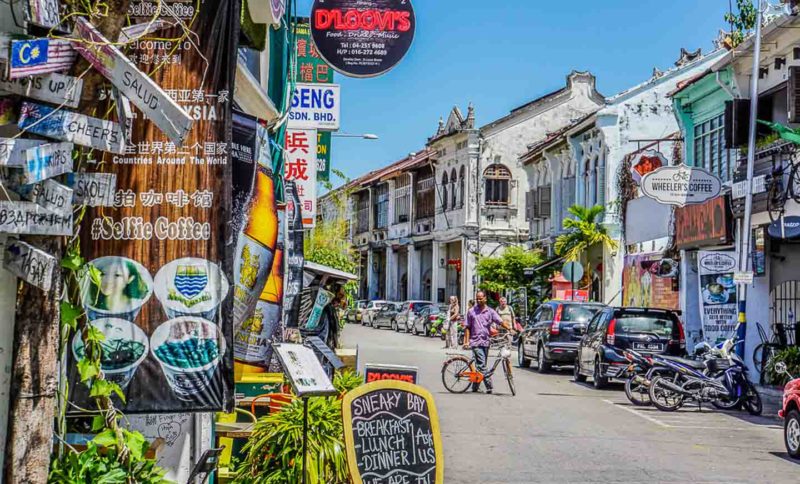 The first pleasant surprise I was greeted with on the streets of George Town was the sights of motorcycles, which in Lagos, we popularly refer to as Okadas.

Bikes litter everywhere in George Town, either used for personal or commercial means of transportation. For a moment, I thought I was back in Lasgidi.

In Lagos, we are used to motorists completely ignoring pedestrians at crosswalks and Zebra crossings, with pedestrians often hurling invectives at the motorists in return. It is precisely the same situation in George Town, Penang. It felt just like home!

On the trade and commerce front, the two cities share similar traits. Lagos is renowned as a major port for trade and has been so for centuries. George Town similarly was a trading outpost of the British Empire in 1786. It is common to hear different accents and see different types of people in both cities.

The thickly supported cement bridges in George Town looked distinctly similar to many you would find connecting the mainland and islands parts of Lagos.
I had never been to a non-African tropical city before Malaysia. There is a reason occasioned by climate needs to construct bridges in that way in developing tropical cities.

Before I arrived in Malaysia, the rhetoric I heard was that Malaysia was strictly an Islamic country. While indeed most people here are religious, as in Lagos, a combination of Muslim, Hindu and Buddhist beliefs appear to co-exist while Lagos is home to a mixture of Catholic, Non-Catholic Christians, Muslim and traditional African religion adherents. Contrary to stories about Nigeria being under constant attack from Boko Haram, religious tolerance exists in Lagos, wuth peaceful di-khabitation of different tribes and religions in Lagos.

Both cities have a developing tech industry with a growing start-up scene. George Town, Penang is considered by some the “Silicon Valley of the East.” I was told that it is famous for its hardware production while Computer Village and Yaba tech hub, in a similar fashion, are fast becoming the Silicon Valley of Nigeria.

During ceremonies in Lagos and George Town, Penang, performances and honorifics are common, especially event openings. A lot of time seems to be dedicated for protocols and at recognizing dignitaries before ceremonies begin.

However, on the flip side, just like their similarities, the two cities’ differences are striking. One major difference between the two cities is traffic situation. If you live in or you have been to Lagos, you will hardly forget the never-ending traffic. While I was in George Town, there was rarely any traffic, and people did not honk excessively or shout in the traffic there. There were relatively few pedestrians on the road at a particular time in Penang. As the most populous city in Africa, the streets of Lagos are full of cars, motorcycles and people all the time.

While there are three major identifiable ethnic groups in George Town, Penang: the Malays, Chinese and Indians, Lagos on the other hand is home to mostly Yorubas and Igbo with several thousands of other Nigerian ethnic groups present, including the Hausas and Niger Delta indigenes.

In Lagos, people do not follow different laws based on their nationally recognized religion. But in George Town, Penang, your religion is stated on your national Identity Card and the law you must follow applies accordingly.

Also, while Lagos is a hub for business tourism; George Town, Penang is known as “The Pearl of the Orient” and attracts many tourists for its street art and UNESCO Heritage status. Backpacking culture is common in George Town (shout-out to Love Lane and Chulia Street) but not in Lagos. Lagos is probably not considered safe enough for this kind of travel.

The hospitable nature of people in George Town is also something that set is aside from Lagos. While acknowledging that Nigerians are warm and loving (in their own way) the pace of life was much calmer and friendly in George Town. As someone who looked and sounded very different from most people in George Town, I was treated with courtesy, kindness and warmth. People were very quick with a smile and guidance in Penang and were genuinely interested in hearing each other’s stories.

The rains are here, and with it, the attendant flooding and this is another area where the two cities differ. George Town is better planned and equipped to deal with its current population than Lagos. Though we share similar torrential rainfall, the process of drainage after rainfall in Penang stood out as much more efficient than in Lagos.

As a Lagosian, we do know our food. In Lagos, most times, it can be very elitist, but in George Town, fine dining and street eating mix. For example, Tekksen restaurant, an acclaimed Chinese restaurant which partly spills unto the street had the best fried rice I’ve ever had!

On the Social scene – George Town has a huge cafe and chilled bar culture; while Lagos has a big nightclub and boisterous party scene. I heard countless acoustic covers of Western pop songs in George Town; in Lagos, you won’t go far before hearing American urban music and popular afrobeats.

George Town is the colorful, multicultural capital of the Malaysian island of Penang. Lagos, on the other hand, is the commercial capital of Nigeria. But then, similarities and differences are what make the two cities thick. Therefore, if you can, i encourage anyone to plan a trip to Malaysia and stop over at George Town, Penang and you will be glad you did.

Traversing the Mood of Landscapes: A Review of...

In The Gambia, Nigerians are having the fun...

In Singapore, quarantine comes with a sea view...

Discovering Addis Ababa in Deira: inside the UAE’s...