Some of the many functions the theatre arts is expected to perform for audiences is to entertain, provide them a momentary safe passage to escape from reality, reinforce social values, challenge them, and supply them a more focused look at life.

It’s no surprise, therefore, that the Vice-Chancellor, academic and non-academic members of staff, graduands, guests and students of the Obafemi Awolowo University (OAU), Ile-Ife in Osun State understand these, and seized the opportunity to showcase the talents in its Dramatic Arts department on the auspicious occasion of its 46th Convocation Ceremony.

The convocation play is a ritual performance for the entertainment and education of graduands, staff, students and guests of the institution which form part of the OAU convocation ceremony.

The convocation play for the 46th convocation ceremony of the Obafemi Awolowo University entitled ‘Adventures in the Forest of a Thousand Daemons’ is a stage adaptation in English of D.O. Fagunwa’s ‘Ògbójú Ọdẹ nínú Igbó Irúnmọlẹ̀’ directed by the Head of Department Dramatic Arts, Wunmi Raji, PhD.

Performing the classic were students of the Department of Dramatic Arts of the University, at the famous Oduduwa Hall on the 8th of December, 2022. ‘Adventures in the Forest of a Thousand Daemons’ follows true to Yoruba cosmology, a landscape where human, natural and supernatural beings are compellingly and wonderfully alive at once – a world of warriors, sages and kings; magical trees and snake people; spirits, ghommids and bog-trolls. In under 120 minutes, the performance chronicles Akara-ogun’s journeys into the forest, encountering and dealing with all-too-real unforeseen forces, engaging in dynamic spiritual and moral relationships with personifications of his fate as well as projections of the terrors and obsessions that haunt man.

The play was preceded by a 30-minute electrifying opening glee featuring energetic performance by students of the department beating local drums, highlighting the aesthetics and cultural significance of drumming in African tradition.

The opening scene begins with Akara-ogun (Compound-of-spells), played by Dipelu Afolabi, being welcomed amid pomp and wild jubilation from members of the cast who played the villagers, as he narrates to them his sojourn into the evil forest dreaded by many. The performance portrays some of the famous depictions of the novel like how Akara-ogun’s defeated the demon ‘Agbako’ (played by Obed Isibor) with the help of Iranlowo (played by Akintunde Goodness).

The play also shows how the King and his chiefs, out of jealousy for Akara-ogun’s new found fame, decided to send him on a journey of no return to the imaginary ‘Mount Langodo’, where according to the dialogue, is the realm between the village and their ancestors.
The unsuspecting hunter took the bait and will eventually lose three of his men during the journey.

It also tells several Yoruba folktales centered around the animal kingdom, midway, as part of the stage performance using animal-themed facemasks to portray the fox, elephant, and the lion.

It closes with the scene where reality dawned on Akara-ogun and his men that ‘Mount Langodo’ is not a place but a realisation of how wisdom and strength work together to achieve results.

There was proper sync of dramatic actions and lighting, as well as the attentiveness of the audience in the unfolding of events, as they react in response to the stage performance. A case in point is the switch from the soft romantic expression of emotion and feeling eliciting the “awwwn!” responses from the audience between Akara-ogun and Iranlowo to the heated argument between them when the former professed his undying love for the latter also drawing the “sora fun obinrin” reactions from a section of the audience.

Also noteworthy was the realistic and characterizing choice of costumes. Akara-ogun was vividly armed with several amulets and his Kembe and Danshiki were laced with cowries, depicting how hunters or warriors of ages are dressed. This thematically suggests the difference between the nobles, the commoners and the hunters or warriors who protect the former. Iranlowo’s costume styled in a goddess-like fashion depicts the settings of the play, and her maidens dressed in white wrapped around their chest and covering as far as above their knees and also carrying fìtílà (local lamp).

The flexibility and creativity of the director and cast was evident in the use of props, lighting, chants, songs and dance.

The chorus was a constant reminder for the audience that they are still sitting in a theatre, witnessing the representation of specific events. The use of songs and chants further solidifies the dramatic climax. The songs and chants amplify the actions on stage. Audience reacted to the songs by Olohun-iyo (played by Fakunle Bolaji Joshua), which elicited pity, war and victory at different times, as any director would like them to respond.

The Vice-Chancellor, Professor A.S. Bamire’s post-performance statements drew the curtain. The pride and excitement in the Vice-Chancellor’s voice was obvious, as he appreciated the drama troupe. He praised the students of the department of Dramatic Arts of the university for a wonderful display of everything they have been thought outside the walls of their lecture rooms. He further advocated for theatrical performances as another source of revenue for the university, if tapped into. 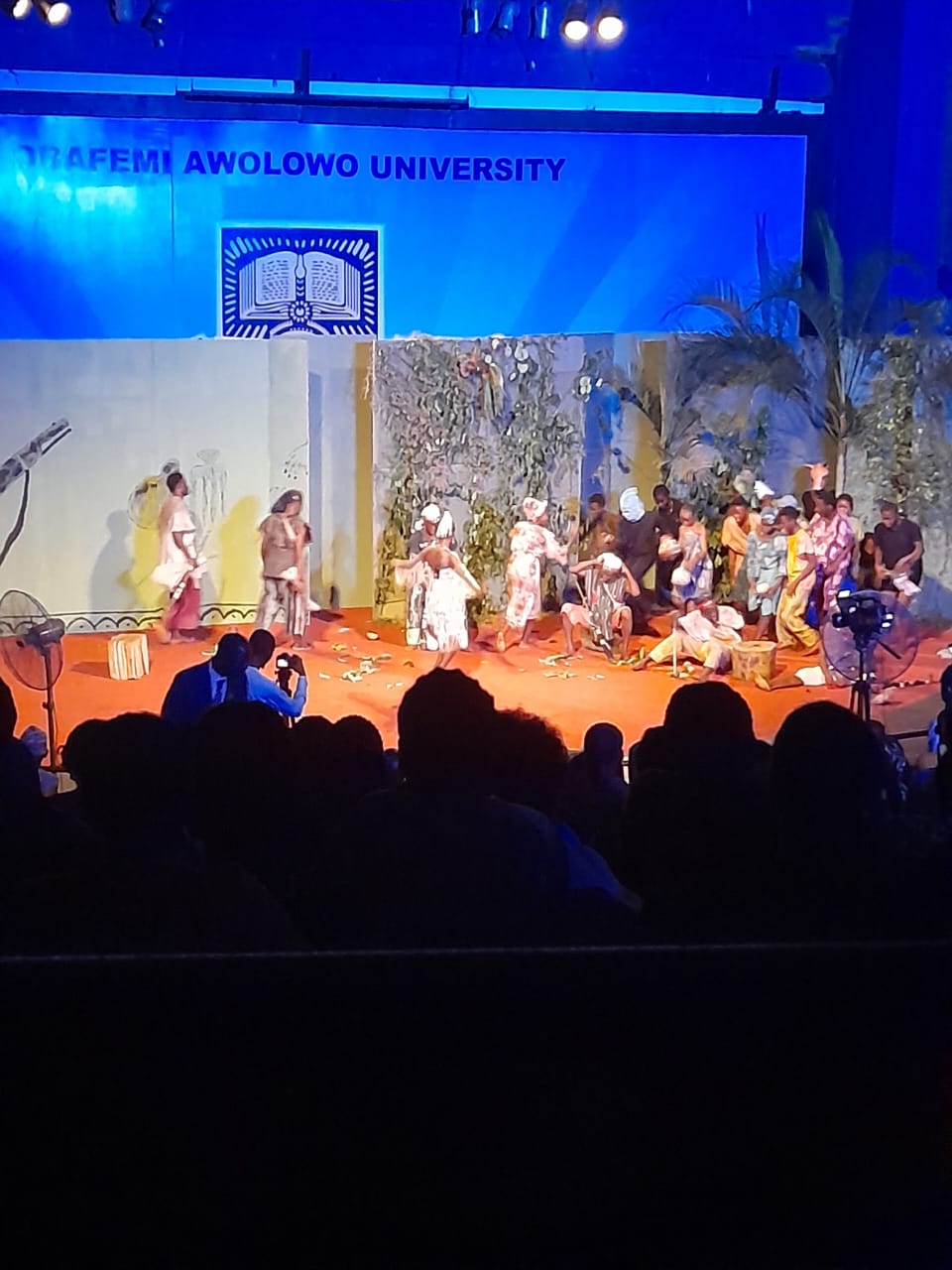 Burna Boy, 27 Other Nigerians Listed Among 100 Most Influential Africans

Elesin Oba: The Rebirth Of An Era

Woman King is worth watching: but be aware...

In The Law is an Ass, Adedokun curates’...

‘Collision Course’ – a reminder of #EndSARS and...

Blood Sisters: So Far, So Mo