Officials of NFC and some stakeholders in the film Industry have beld series of engaging forums since Sunday, March 23 at the Nigerian Pavilion, Africa Hub, Marriot Hotel in Berlin.

According to the Managing Director of NFC, Dr. Chidia Maduekwe, who is also in Berlin, the FB2BF is designed to meet, interact and explore partnerships and collaborations with major stakeholders in the film industry and participants who are interested in keying into the activities and programmes of the Nigerian Film Corporation and the huge investment portfolios in the Nigerian film industry.

The forum has featured sessions on Training and Development, Content Development/Broadcasting, Film Festivals and Co-Production, Cineplexes/Community Theatres and Investment opportunities. 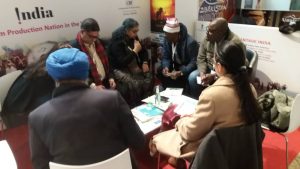 Eyimofe, which is wholly financed by Nigerian investors and was produced by GDN Studios in Lagos, tells the story of two Nigerians on a mission to succeed abroad.

The film is contesting for the First Feature Film Award at the festival and tomorrow’s screening will also have an industry event to celebrate the enviable achievement of making it to an A-list film festival, according to Mr. Toke Ibru, one of the film’s executive producers

Copyright: How AVRS can become organization of choice in Africa – Expert

Despite opposition, Censors Board insists producers must belong...

For Akeredolu, It’s Tourism Over Oil Blocks, As...