All creatives have a lot to learn with this new form of delivering Theater or any form of performance that involves movements, sound and visual backdrop of any sort. How can a photographer learn how to capture a Zoom-created work? One of the challenges is that for any little movement, the shot will be distorted. The photographer’s dilemma however cannot be compared to that of the Director. Therefore, I asked what directorial approach a Director in this virtual situation will have to adopt while directing a cast he cannot see but can only feel with his heart. In this new form of theater, you do not direct for movement and stage esthetics. You direct for voice and depth of interpretation. Each actor must be adept at manipulating a web camera to give the effect needed. The costumier works with each artist depending on what each has at home. The sound-man plays roles different from what they are known for.

In a way,I experienced my first theater on screen. It was the art of facing fear. I noticed fear on the faces of the actors as they played their roles, I heard lines that tickled and led to one or two chuckles. The story was here and it was there. Dance music encouraged a few steps and Segun dipped his tongue in what sounded like the guttural voice of an ancestral mask. Invoking the spirits of the departed to cleanse the land of a pandemic that threatens a global pandemonium. As soon as he was done the scene moved to South African and the very familiar dire rent the air. One viewer had time to quickly slip in a few words of ‘disgust’ “Why is the actor being sexy with “Senzeni na”? Hayiboh” I threw caution to the winds and exhibited my ignorance. Privately I asked “What does “Senzeni na”? Hayiboh! mean please?” The other viewer was kind enough and not to irritated. The response came “It’s Xhosa: “what have we done?”

Since I had no idea what it meant, the rendition by the actor meant little difference to my comprehension of the plot.
Just while I was recovering from the subtle darts of this critic, another arrived “This scene drags.” Again I could not tell if it dragged or not, seeing Segun and Bola in the production was enough excitement for me.

Here is the official voice of the producers:

The art of facing fear is an international production for the digital play devised specifically for Zoom app. It will start next 31st of July [but I was privileged to watch a dress & tech]. The project is an international cast with artists from three different continents: Europe (Sweden, England and Germany), Africa (Cape Verde, Nigeria, Senegal, South Africa and Zimbabwe) and South America (Brazil).

The text refers to a dystopian world after 5.555 days of quarantine due to a pandemic crisis. In this isolated world, many things are not available anymore for people. Despite the government absolute control on digital communication, they still have the chance to keep in contact to each other via internet.

At the end of the performance, artists and audience may gather and chat as an international community. [Yes we did chat and it felt good asking questions and receiving responses] 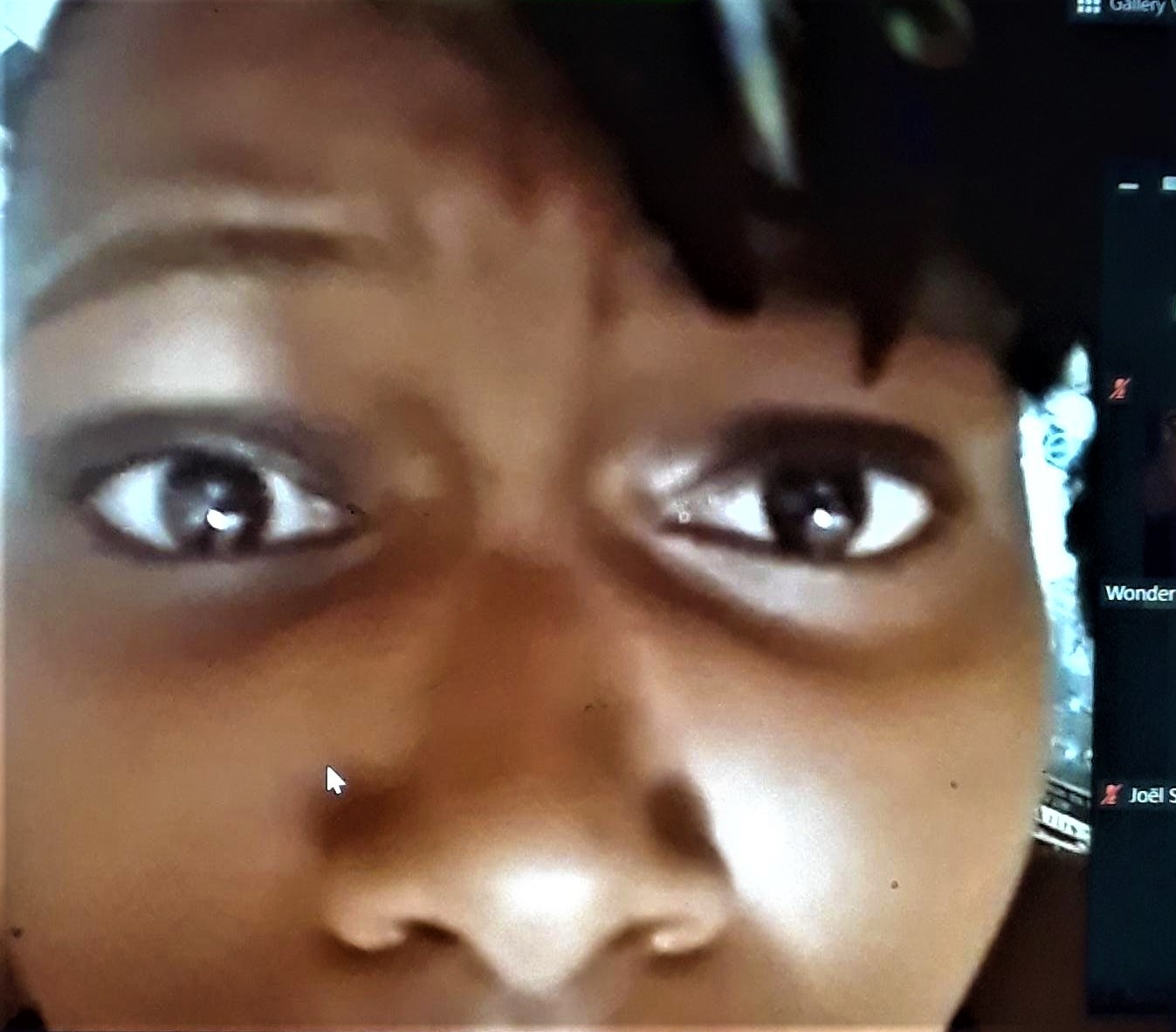 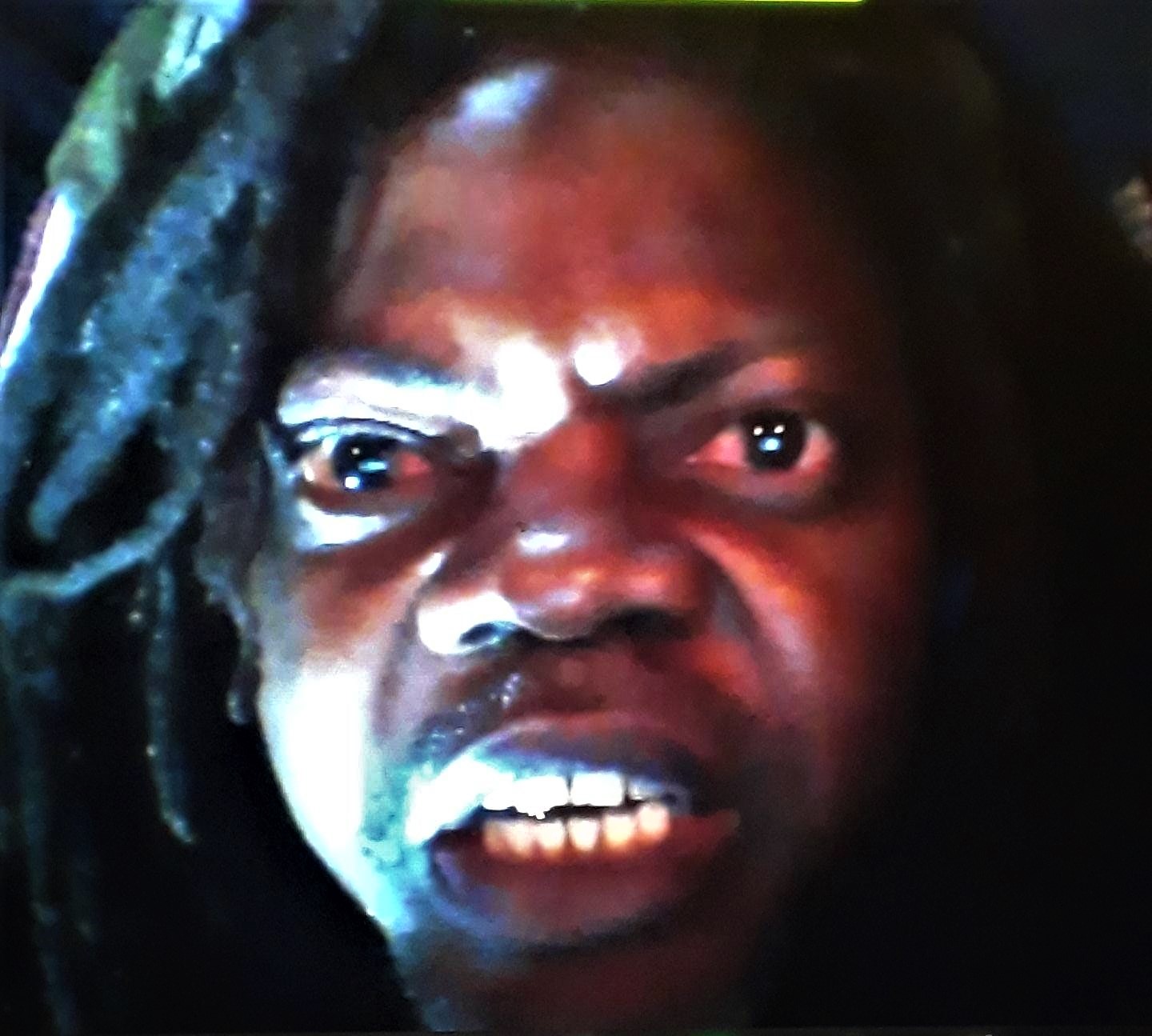 There is a line in the production that stuck with me; The virus is alive but it is not life!
During the question & answer session, I asked a couple of questions and I think I slipped in a quick follow-up
Is it possible to know the technical ‘tricks’ that were deployed?
It was Philisiwe, one of the performers from South Africa, who responded. She wrote in the chat box “The costume designer also the light designer had sessions with actors to guide them depending on their character and what they have at home. Some are in bathrooms and wardrobes.”
My second question was about cost, “If you were going to think of the cost involved in this virtual production, how will you guess such a cost?”
The Director himself responded; Rodolfo is from Brazil. He said “the cost is mostly the actors´ work, because we use materials from each one´s home, Kole. We are preparing a new production to US”
I added too that Data is very expensive in a place like Nigeria
A lady from Sweden agreed and added that she was off-line a number of times and was afraid that she may not be able to come on when it was her turn to feature.
In praise of Theater by Zoom, the director added for effect, “…..but on the other hand, it can be available for people who live in small villages and have no condition to go to big cities to watch theater.”
When it was time to press that leave button, Sboniso Thombeni managed to type in his appreciation “thank you for experiencing this with us”
(Diary of a Lagos Bobo, July 30, 2020)
I just sold my fear
for a very fair price
wrapped in a carton of lies
and wings that will not fly
I just sold the last of fears
that held me at the margins
of life
Be bold as the old with gin
behold the horizon within
Rise son, is the new song
life is a dance we learn as we move
The buyers are here to remove
their wares and I, in new clothes
of awareness of a new found me
(Diary of a Lagos Bobo July 31 2019)

Ojude Oba Festival Called Off Due To COVID-19...

Theater is a reflection of our daily life. A society without stage theater existence is like ride a horse without the stud and the spur.
Total theater culture must be revived back in tho the Nigeria system.
Thank God for Adefila theater company and few others who are striving to make a mark through theater.
Well done Guys.