Kate Luxmoore plays the clarinet and piano and is the wife of Grammy award-winning percussionist, Lekan Babalola. She was on vacation recently in Nigeria and spoke about recording with Tony Allen, fondness for highlife and the global acceptance of Nigerian music. Excerpts:

I thought a particular project brought you to Nigeria …
This is a family holiday, but I’ve been here five or six times before. The first time I came with Lekan, we did a few gigs. Then I came to get a job with the MUSON Centre; they sort of offered me… They interviewed in London, then I came for a week, but by the time I got here, there wasn’t a job to be had. If I’m here, I do some gigs. We did two gigs this time.

The first was at The Reserve; it’s a new restaurant/club. They are trying to develop music there, jazz particularly. Then, we were at Freedom Park on Friday night, part of their Afrocentric programme. It was organised by someone that works with Lekan on his Eko Brass Band project.

I’ve been here before, and I played with Fatai Rolling Dollars, Alaba Pedro, I met all these people. This was a long time ago; 15, 16 years ago. Biodun Ayinde Bakare. I’ve met the Highlife musicians, and I played with them, and that’s the music I love. It’s fantastic music.

Why do you love it?
I think it’s got so much connection to swing, a sort of clarinet style: the 1950s, 1960s jazz. There’s a strong connection of that music, and I particularly like the acoustics style of it; the guitar, the percussion. I love the simplicity of it, yes, I enjoy that music.

Can you play it, highlife?

I can play on it. You know I’m an English musician, I’m not African, but I’ve played with all these people. I can play on it because I understand…I’ve been working with Lekan for a long time. I can hear the phrasing and things. And I’m interested. I think as a musician, you can find your way into a lot of things but you have to be enthusiastic and open to it. You have to come with an open mind and clean heart in a way because you are just the same as everybody. We are all the same; we’ll all have to make something sound good together and if you want to come, then you can. And I was welcomed in, so I did my best with a bit of recording with Alaba Pedro but just not long before he died.

But it was wonderful to meet those gentlemen because they connect you back to; when you play music with people, they connect you right back to where they started learning it, you can feel it from them. I’ve been recording in New Orleans last October with Herlin Riley, and he’s worked with Lekan. He’s a New Orleans drummer; he’s from the root of the jazz. Taught by his Uncle who was taught by his Dad; part of the tradition and it’s the same thing when you sit in a room with somebody who has that. You just feel that tradition, and it’s a real honour to have had that opportunity.

It’s a wealth of music. I think the whole Fela thing has blown up in Europe and America. It has kind of slightly overlooks the fact that there were so many people playing music. I read Tony Allen’s old biography, and he’s naming these different bands that were playing in the 60s, and everybody was live music; like in London. Every night, someone would be playing live music in a club somewhere, so I think there’s a massive wealth of it.

I love what’s coming out of Nigeria, all the Afrobeat, the songs, the artists; I think it’s great. But I would also like to see the high life and the traditions kind of explode a bit more, be re-ignited in a way so it can benefit more people who are playing instruments because you’ve got a lot of good young players; trumpet players, sax players and they need a platform. They need more performance opportunities here and also elsewhere. They could do well; African music can be going all over the world because people want to hear it, but that access is not there yet.

I think there’s fantastic music here; traditional music, all of it. It just needs to be encouraged, and it needs opportunities to be valued. I think it would be of benefit all over the world, to be honest, because Nigerians are everywhere. They have a presence, and we need to educate each other in the fact that we are all human beings because where I’m living at the moment, there’s a far-right movement. I’m in England, and my children get called Nigger. If we don’t tell each other how this is and speak the truth; through music, we can have a dialogue. We can have a discussion. We can know what their roots are and stand up firm. Then we can be equals. Music is an equaliser. It’s the one thing, and the arts generally are an equaliser. I think Nigerian music has done a lot already, it has broken a lot of barriers, and I hope it continues. 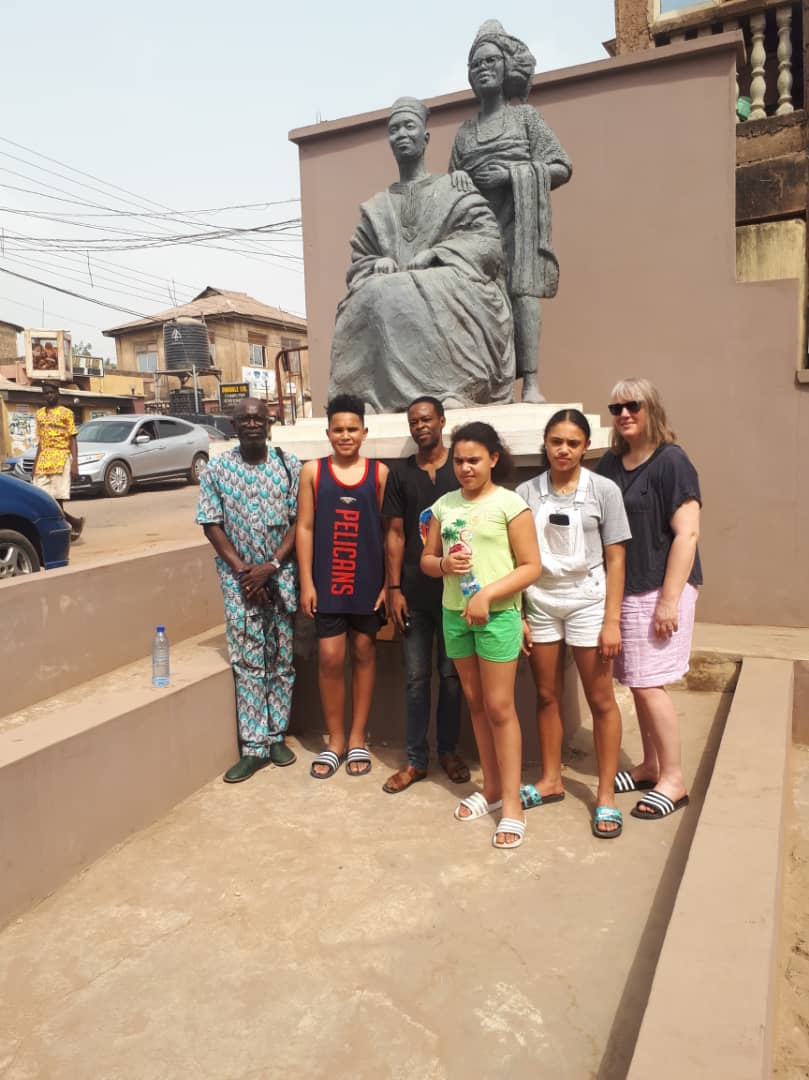 Apart from your husband, is there any Nigerian musician you would like to work with?

Yes, I just had the opportunity to record with Tony Allen. It was a significant recording, and it’s coming out. It’s like what I said. You’re sitting in a room with somebody who has decades of experience playing but what I would love is for my husband to work with Burna Boy (laughs). I think that would be an excellent collaboration because of the generations and the fact that they have got a lot in common and there’s a lot they can communicate back. I would like to see that happen.

I’m very much into music education. I’ve always been, and I set up a lot of projects. I would love to get more involved in that here because there’s so much good music, but I would like to get involved with developing a kind of education programme here, and just opportunities for young people. The same that I do in the UK, that’s what I would love to do here.

What attracted you into that?

I’ve always been interested in religion, and from religion, I started looking more into philosophies, ways of life. Christianity, which is what I was brought up in, it’s always been used in England to oppress anybody that’s not part of the ruling classes and so when you understand that as an English person, there’s a lot you are not prepared to take. People don’t go to church now in the UK, but I’ve always felt there was something more and I was looking at different things.

We have druid tradition in England, and that’s what makes sense to me. I grew up in the country; it’s all about nature, living in balance and in harmony and that connected with the tradition here. It helped me make sense of the traditions we’ve lost because we’ve lost so much of this in the UK. But it’s still here, and it needs to be preserved. Nobody practising Ifa is saying people can’t be Christians or Muslims; they are just continuing what they are doing. I think that’s very important and it has become part of our way of life. I don’t fully understand it because of the language, but I know the essence of it, and that’s how we live as a family, and it helps us hugely.

And I like the fact that it’s an all-encompassing belief as opposed to religion which is dictating something to you. It’s allowing everything; that we can live harmoniously together. It’s not about that’s not ok. It’s about how we can live our lives in the best way we can, be fulfilled, happy and have enough.

Is there any particular reason you have a preference for clarinet and piano?

When I was growing up, people had a lot of old pianos. If you had space, you had an old piano. We had an old piano, and I just sat down and had a go at it. Then I wanted to play the flute, I loved the sound of it, but my Uncle had an old clarinet. He had learnt it at school when he was a child. So, he had this clarinet in his cupboard, and one holiday, he let me try it out. That was it; I was hooked. I didn’t put it down for the few days we were there. It was like a voice, like an extension and for 40 years, that’s what I’ve been playing. It’s a part of me; if you don’t do that, it feels something is missing. So, it’s not always about performing. Sometimes you just need to play. That’s what it is for me.

Did you meet Professor Soyinka yesterday?

We did. That was very lovely, and it was a real honour to meet him. I think when somebody has done what he’s done and lived a long life, you just feel so much inspiration from the way they are, how they are, what they say. They have come to terms with themselves and things, so it was an honour for me. It was a privilege for the kids as well. He’s done so much, and he’s still doing so much for this country. He’s supported Lekan in a way that has made the difference because as an artist, sometimes you are on your own. You’re trying to forge your path, and sometimes you’re the only one on the path. Sometimes you get lost; you’re not sure of where you are going because it hasn’t been done before, we don’t know, it’s not clear. When you have someone older, wiser supporting you, that’s been a real blessing.

What are you working on presently?

I have done a couple of recordings in New Orleans, then the one with Tony Allen. I’m starting a lot of English folk music, and I’ve been doing that for quite a long time, and Lekan used some of it in his album. We mix English folk music over the Yoruba groove, so I’m just looking at that more and more. We have a jazz festival in Birmingham. We are in the fourth year. I try to do that every year as a community festival, it’s free, and we try and promote more African and African diaspora jazz in the city.

UNWTO, WHO respond to Coronavirus by launching “Healing Challenge” to Accelerate Tourism Recovery