Chimamanda Adichie is THISDAY’s ‘Woman of the Decade’ Award Winner

Renowned Author, Chimamanda Ngozi Adichie, has been named “Woman of the Decade” by Nigerian Newspaper, THISDAY in commemoration of its 25th Anniversary.

Adichie was selected as the editors’ choice while the United Nations Deputy Secretary-General and Former Minister of Environment, Amina Mohammed, was named the people’s choice.

In her remarks, the author said: “The thing about being recognised is that it is not the reason one does what one does, but it is always wonderful to get that validation. It means that somebody is saying to you, ‘what you do matters,’ and it is a wonderful feeling. As a Nigerian, it is an even more wonderful feeling to be recognised by my own people. Thanks to the editors at THISDAY and everyone involved in the voting process for the honour of being named ‘Woman of the Decade’ alongside UN Deputy Secretary General, Ms. Amina J Mohammed who I admire very much. Congratulations to the entire THISDAY team on your silver jubilee.”

“JP Clark’s poetry means a lot to me — (and to my character Obinze in AMERICANAH!). Thank you to @thisdaynewspaper for naming me ‘Woman of the Decade.’ I was delighted to have the award presented by JP Clark,” she wrote on Instagram.

Also a recipient of the MacArthur Foundation Fellowship, Adichie’s works have helped to focus on the Nigerian culture and ignited a global conversation about the role of women in the modern world. 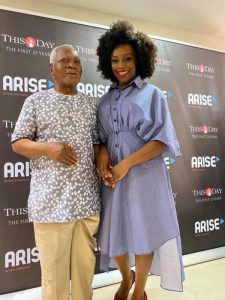