In a year marred by a deadly pandemic and extraordinary political and racial strife, book sales soared, helped by a handful of major titles.

Adult nonfiction books related to politics had another strong year—especially those by Obamas and those about Trumps. A Promised Land, the first volume of Barack Obama’s presidential memoirs, was the top print title in 2020, moving nearly 2.6 million copies at outlets that report to NPD BookScan. That number is lower, however, than the 3.4 million copies of Michelle Obama’s Becoming sold in 2018, and the former first lady’s book hit the top 25 overall list yet again this year, selling almost 596,000 copies.

Three books on Donald Trump and his presidency—the #4 title on the list, penned by his niece; #15, penned by his former national security advisor; and #23, penned by a Pulitzer Prize–winning reporter—sold more than 2.4 million copies combined in the year.

Books on social justice that hit the top 25 include the frontlist bestseller and Oprah’s Book Club pick Caste by Isabel Wilkerson, as well as backlist titles by Robin DiAngelo and Ibram X. Kendi, whose sales spiked following the killing of George Floyd by Minneapolis police in May. Those three books sold more than 2.1 million combined copies in the year. Nonfiction books by Glennon Doyle and Joanna Gaines also did well.

Other big hits came from perennial children’s and YA heavyweights Suzanne Collins, Jeff Kinney, Stephenie Meyer, and Dav Pilkey. And adult fiction titles that have seen major sales over the past few years—The Boy, the Mole, the Fox, and the Horse; Little Fires Everywhere; and Where the Crawdads Sing—saw additional success in 2020. 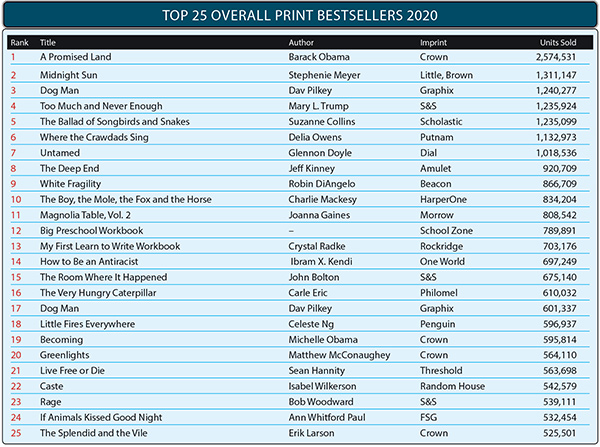