Bolanle Austen-Peters asserts rights to Moremi the Musical, vows to go ahead with streaming (Poster)

Theatre director, Bolanle Austen-Peters has asserted her intellectual rights to the acclaimed stage production, ‘Moremi the Musical’ and reiterated that nothing would stop her from doing with it as she pleases.

The play, a collaboration between her and the House of Oduduwa owned by the Ooni of Ife, Oba Adeyeye Enitan Ogunwusi was first staged at TerraKulture Arena in December 2018 and is set to be streamed on BAP’s YouTube channel this evening.

The House of Oduduwa, through the Queen Moremi Ajasoro in an Instagram post, had, however, objected to the streaming. It claimed it owned the rights to the production and that showing it online is a breach of the agreement.

Streaming it online, it further noted, could affect all aspirations of the QMA and deny it expected future revenues. 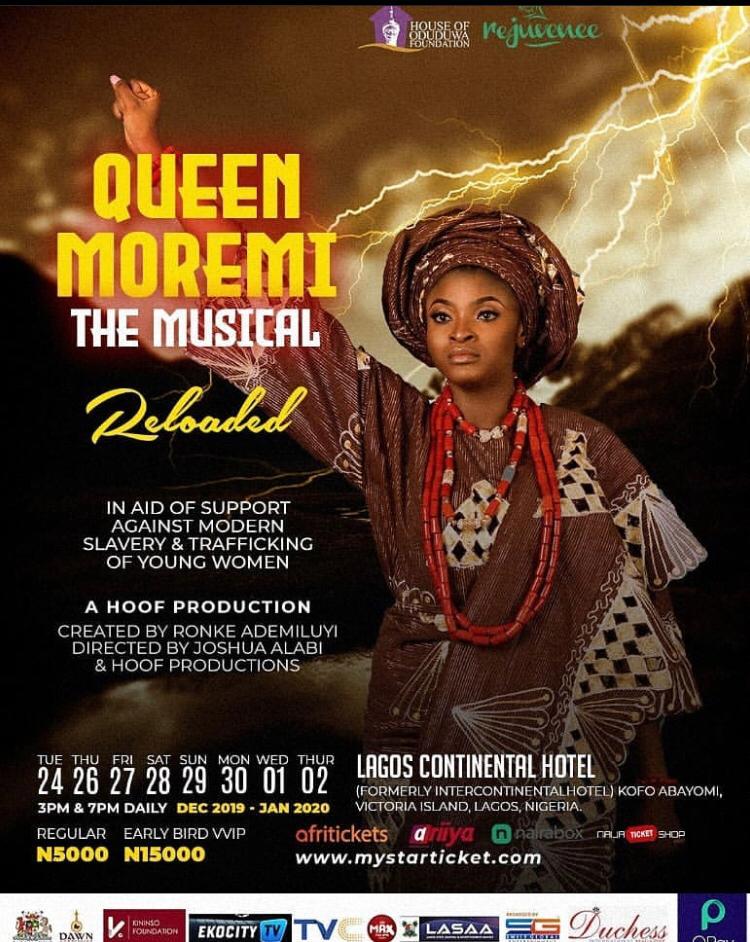 The QMA post on Instagram read: “The stage play of the Queen Moremi was created and produced to support all QMA initiatives. We are grateful to have been able to engage with talented individuals to make the second stage performance possible with BAP’s who was commissioned and paid to Produce Moremi The Musical in Dec 2018.

“Moremi is owned by The House of Oduduwa which is the Ooni of Ife. Streaming the 2018 show online is in breach of the agreement. It could kill all the aspirations as proceeds from Moremi The Musical are used to campaign against Modern-day slavery and trafficking of young women.

“Moremi The Musical was produced to go on tour in Nigeria, UK and USA and not streamed online until all parties involved in the production agrees.
“Streaming it online with lack of permission and rights to IP content is a breach of the agreement, and we hope the clauses will settle the matter legally. Also, theatres only stream online projects they believe has rounded up its original tour for at least two to three seasons and we still have a few more seasons left. To totally stream the show is a discredit to all efforts. We hope something positive comes out of these issues and pray for the best for all parties.”

But reacting through a statement signed by the producer of the debut show, Joseph Umoibom, Austen-Peters affirmed that she owns the production from script to actualisation.

The producer, who in turn accused the House of Oduduwa of duplicity, reiterated that this evening’s streaming would go ahead.

He said: “From script to actualisation, Bolanle Austen-Peters was the driving force behind the acclaimed Moremi the Musical, which made its debut at Terrakulture Arena in December 2018.

“The House of Oduduwa, having tried several times to make a success of the historical figure into a stage play, approached the famous stage director to assist them.

“Mrs Austen-Peters agreed to their request, part-funded and directed the play twice after an MOU was signed. However, she subsequently found out that the House of Oduduwa had plans, despite signed agreements, to replace her and take full ownership of her intellectual property.

“In December 2019, the House of Oduduwa, using BAP’s exact script and direction, staged their version of the play without recourse to BAP.

“BAP is streaming her version of the play today on YouTube because it’s her intellectual property.

“Plays run concurrently on stage and in movies, and as a matter of fact, they feed off each other. Stage experience can never be compared to online experience if the product is good.

“House of Oduduwa should celebrate this development and are at liberty to continue with their version of the play.”

There Was A Poet Called Idzia Ahmad