Here, you can add yours or call it by any of the names above or whatever FAJ recommends we call it. One thing is certain, this is a book whose time has come. Perhaps, it should be said abinitio that no one deserves to be called a major voice in the reportage of entertainment in the 1990s leading into early 2000 than Femi Akintunde-Johnson (FAJ).

Without setting out to, he became the one who pointed the light on who was hot and who was not. What was trendy or tardy. 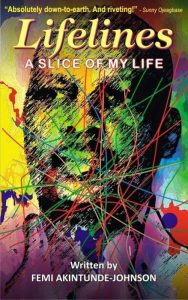 My generation at the time took a cue from his sometimes berating views. If you got his attention then with your role in a soap, stage play or music, it meant you were on the right path. From The PUNCH to National Encomium, his views mattered. Even more interesting was the fact that he did this with an amazing intellectual depth that was easy to read. Operating within an industry that, at the time, was beginning to concentrate on the sensational than the substance of performers in music, television, film and stage, FAJ managed to keep his head and pen clean.

In the midst of the sleaziest of reports, his robust criticism, views or interventions in the entertainment arena still gained the respect of his followers. Such was the level of his keen mind that he would dare to take on the revered Benson Idonije over a series of articles.

I noticed FAJ’s writings in the early 90s when my name started appearing in my initials (RMD) alongside my late wife, May Ellen Ezekiel (fondly called MEE). Either by accident or design or the sheer desire to save typing time or space. FAJ would just call me RMD; and gradually my full name would be eroded as this curious bug caught other younger writers who followed FAJ and drank from his pool of well-written and researched interventions.

I suspect this is the first in a series of many forays to come. With questions still begging for answers: Debates on what should be or not be? Naija or Nigeria? Nollywood or no-wood? What is the authentic Nigerian music? And many more brewing.

It won’t be too long before we see the second coming of an intervention that is double this size. FAJ is finally in the building, and here to stay!

Afolayan seals deal in Cape Verde, Senegal As ‘The Citation’ prepares for a 3-country shoot

Bridge Across The Seas: When words paddle their...