In The Gambia, Nigerians are having the fun of their lives

It is a sunny day in Serekunda, southwest Banjul—capital city of The Gambia. Some men and women in orange shirts are on a cleanup exercise at a hospital. Some are inside, cleaning wards and bathrooms; others are clearing an underbrush outside. The voluntary work is marked by banter and fun because the effort feels genuine. Members of the Nigerian community in The Gambia, they are “giving back” to the country they say has made their dreams come true. They may not be extremely wealthy, but peace and the freedom to chase their goals constitute their own abundance. 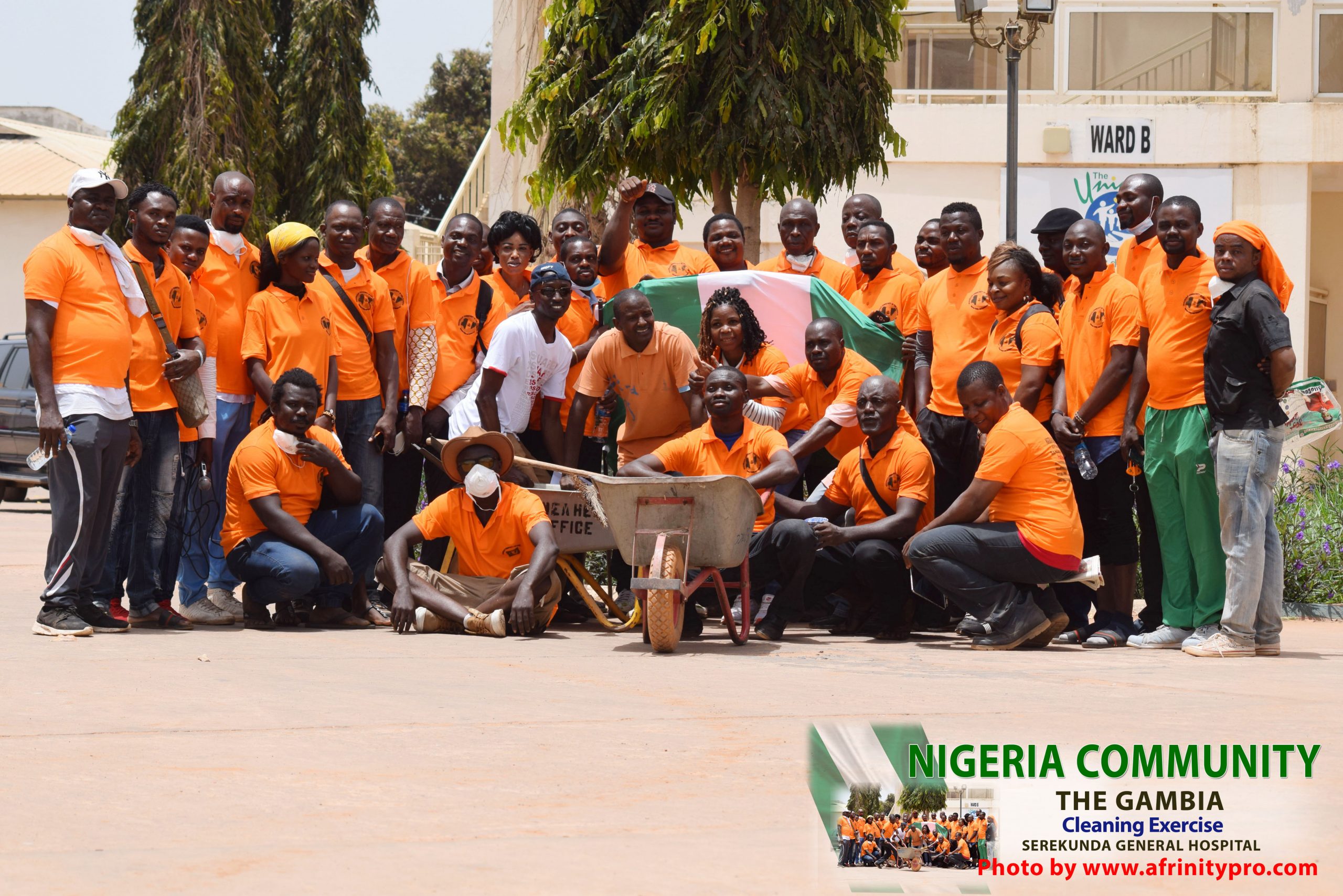 “We are happy here”, says their leader Abraham Monday, adjusting a bowler hat while speaking to a reporter from a Gambian TV station capturing the exercise. From traders and workmen to high-profile professionals, Nigerians have been major players in the Gambian economy for decades. Many Nigerian judges occupy the top echelon of the country’s judiciary, and Nigerian banks line the commercial streets of Banjul. On Gambian radio, Nigerian music entertains the jolly country, as does Nollywood its television viewers.

More recently also, Nigerians are turning to The Gambia for higher education. As Nigerian universities have become incapable of absorbing the explosive number of school leavers seeking admission, attention has shifted to other West African countries—first Ghana, and now The Gambia.

Arulachukwu Ihuoma, a Nigerian studying medicine in the University of The Gambia says the experience has been refreshing. A modern curriculum in an environment of tolerant hosts is a major perk but more than that, Ihuoma tells Nigeria Abroad, is a fairly affordable tuition not to mention the absence of post-secondary delay.

“In my school, the tuition is around $5,000 per session. (For quality medical education abroad, that is fair) For freshers, there’s no entry exam like JAMB. Just have the required WAEC result and go for their interview.” The first year, however, is the “screening year” where students must prove themselves or fall behind. For its robust university education system, The Gambia draws a rich pool of European, Cuban and African lecturers, serving a cultural mix that positively impacts learning.

Though a poor country, The Gambia boasts stable power and water supply for its 2 million inhabitants. Its economy rests on agriculture, a major employer for the rural population, and The Gambian dalasi is stronger than the naira—a unit exchanges for N7.58. A large immigrant element comprising Nigerians and other nationals upholds a budding prosperity in banking, manufacturing, and other formal sectors. The Gambia is predominantly Muslim and tolerant which, Ihuoma reflects, is perhaps its prime national quality.

“For someone that grew up in Northern Nigeria, Islam for me meant a lot of tension. Here in The Gambia I hold serious religious debates with my course-mates, the kind I can’t have in Nigeria. And no one feels offended and we all learn. The country was an eye opener for me on Islam.”

The Gambia’s stability, meanwhile, was nearly ruptured three years ago. Yahya Jammeh, who had ruled the country for 23 years—as military and civilian head—had lost the 2017 presidential election but refused to relinquish power. Tension arose. With the ECOWAS’s military intervention, however, Jammeh stepped aside and went on exile, making way for current President Adama Barrow, the country’s third since independence in 1965. Barrow, a reformist, appears welcoming to immigrants and is cutting a new path on governance and rule of law. As a small country, The Gambia draws lesser international attention, but foreigners are often curious about its phrasal name.

Pre-colonial Portuguese explorers had casually named it after River Gambra, which runs from northern Guinea through Senegal to the small colony. It was, however, prior to independence from Britain that The Gambia’s Prime Minister Dada Jawara wrote to the Permanent Committee on Geographical Names, a British organization, requesting the new nation be named The Gambia. The purpose was to clearly set it apart from another African country called Zambia. Yet The Gambia’s odd character goes beyond its name.

Ihuoma recalls that when she newly arrived the country, language posed a challenge. Though English is the official language, citizens speak mainly their local languages—and they understand one’s another’s different tongues.

“I was waiting for bus one day to Serekunda. Each time a bus pulled up for me, I’d say ‘Serekunda!’ and the driver would say ‘Waaw!’ and I’d wave it off. I stood there in the sun for long until someone told me ‘Waaw’ was not the name of a place as I thought. It means ‘yes’ in Wolof.”

“And they greet you by saying ‘Nakam’,” Ihuoma adds, laughing heartily to the lewd meaning of that Mandinka word in Nigerian pidgin. “They are asking you, ‘How is it?’” 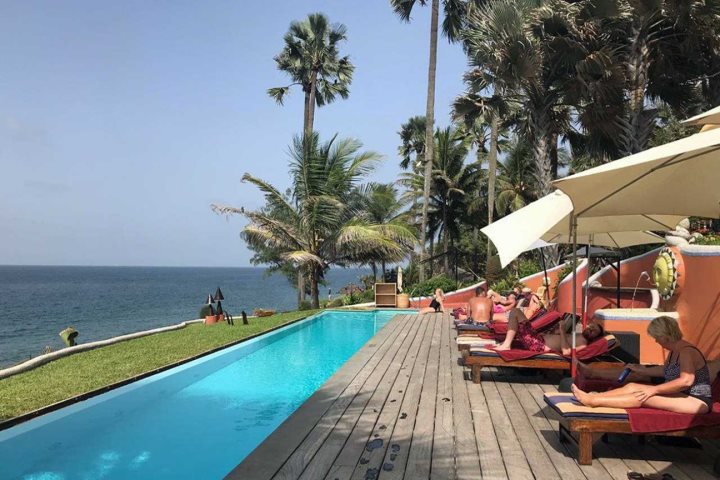 That greeting reflects The Gambia’s famed hospitality. Spectacular hotels, a rich wild life, beaches and lush greenery are all part of the welcoming culture, one that has sustained the country’s tourism potential and earnings. Among The Gambia’s major tourists from Africa are Nigerians on honeymoon, family vacations, and fun-seeking getaways. 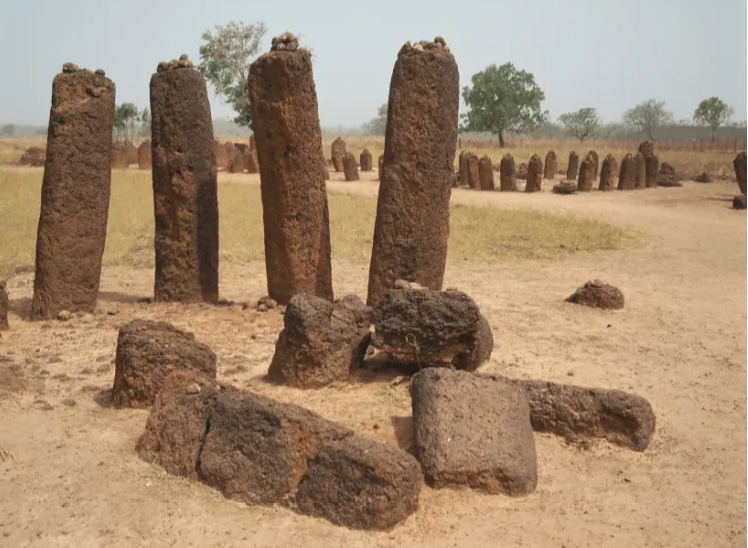 ‘Stone circles’ are part of The Gambia’s tourist heritages

Those living in the country say with a strong Nigerian presence in entertainment and business, The Gambia feels like home, with the added advantage of stability and belonging. “Gambians are talking good about Nigerians here. We are enjoying living in this country,” notes one of the voluntary cleaners.

Ihuoma says many Nigerians come to The Gambia on transit out of Africa, but decide to stay put. She is planning to return to Nigeria after her studies, as she is uncomfortable with The Gambia’s “humid and dry weather.”

But many Nigerians in the group cleaning up the hospital say life is good. “There is peace here and low crime rate,” one of them beams. “What else does one need? Just focus on your business and become somebody. This is home.”

Traversing the Mood of Landscapes: A Review of...

In Singapore, quarantine comes with a sea view...

Discovering Addis Ababa in Deira: inside the UAE’s...