On Sunday, heavy rainstorms in the UAE resulted in the flooding of several shops inside the country’s largest shopping center aka the famous Dubai Mall.

Despite the incident, which also affected the center’s huge parking area, stores remained open, according to Gulf News.

While many tried to quickly escape the site, others rushed to capture the happenings on video and later uploaded their clips online. Minutes later, footage of water running into shops as retail workers scoured to protect window displays took the UAE’s internet by storm.

Naturally, people were left shocked by the incident while many questioned the cause behind the leak in the mall’s roof. In response, the mall’s owner, Emaar Properties, issued a statement on the matter via the Dubai Media Office.

“Dubai Mall was affected by the heavy rainfall, causing leakages in limited areas. We are working to contain all leakages and the mall remains operational and open to the public. Mall staff are on the ground, ensuring the visitor experience remains unaffected,” the statement read.

No injuries or material losses were reported, and the area affected by the flooding was quickly cleaned up. However, the incident continued to dominate trends on Twitter and people had quite a lot to say about it. From the sarcastic to the humorous, the comments were right on point.
Many tweeted out this footage of floods in Dubai Mall’s parking.

While a few were focused on other things

‘When and where will they throw the wet bags and shoes?’

Up for a swim?

Some were impressed the mall stayed open through it all 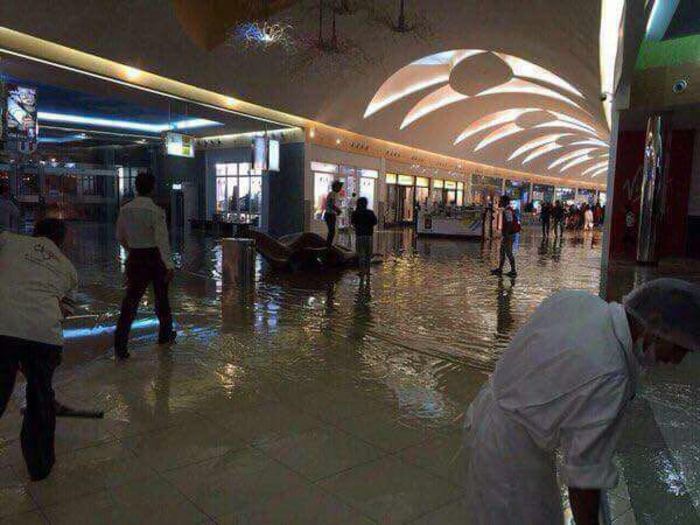 For those who dare argue “The Gulf region is dry and made up of deserts,” floods caused by rainstorms are here to prove them wrong.

In 2017, heavy rains hit Saudi Arabia and wreaked havoc in day-to-day life, even taking over malls. At the time, areas in cities including Dammam, Khobar, Qatif, Jubail, Al-Ahsa, and Al-Khafji were all affected by major flooding incidents.

That same year, a Lebanese mall – which had opened four months prior to the flood – located in Verdun, Beirut had the same fate when rain poured itself inside the building while making its way into many stores and restaurants. The management of ABC Mall apologized to all its customers and made sure to contain the incident quickly.

No Entry: Which countries are restricting entry of...