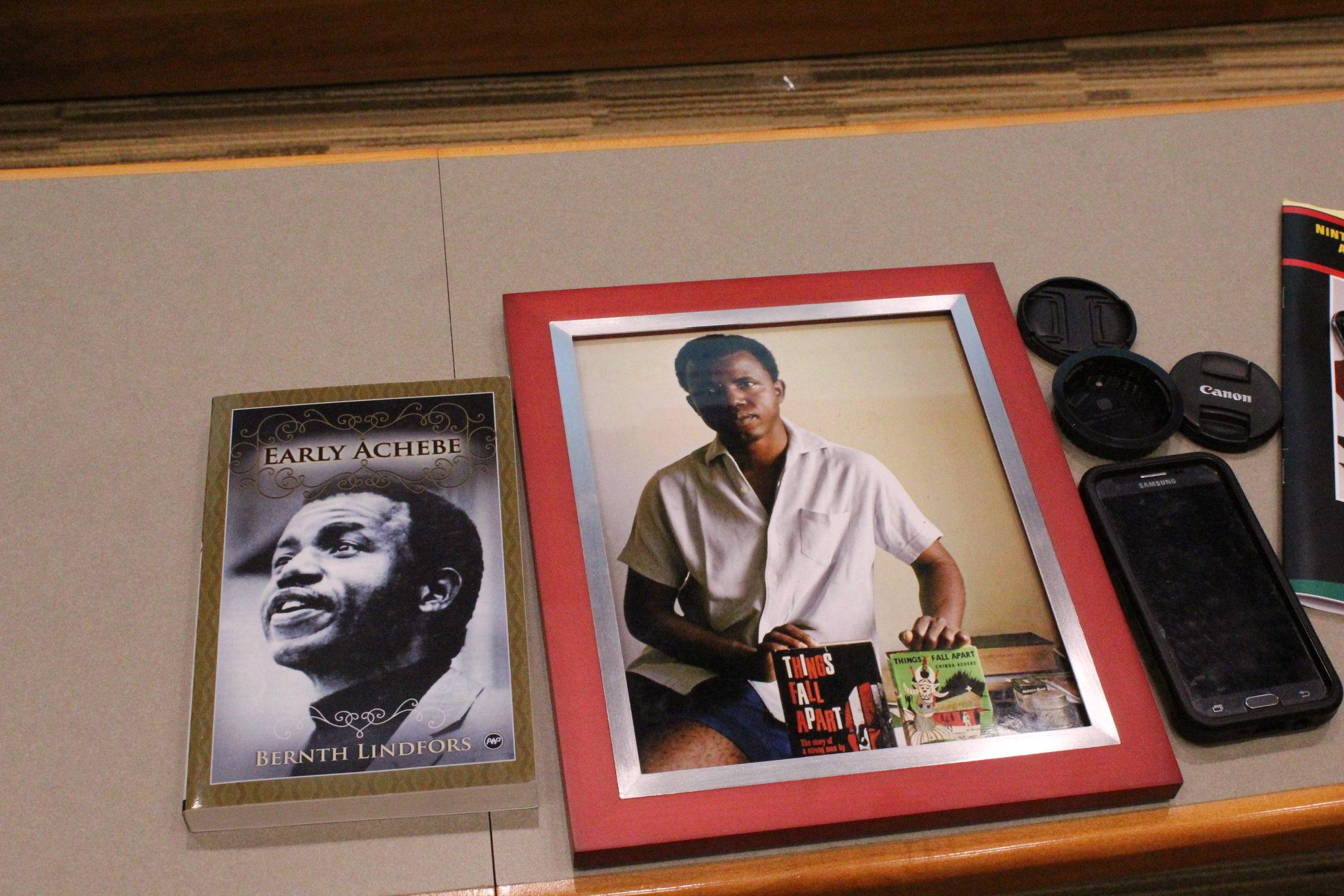 First, it was Norfolk State University, Virginia that celebrated the 60th anniversary of Chinua Achebe’s Things Fall Apart, sometime in October 5th 2018. The conference/celebration brought scholars from across the United States of America and from different countries on the African continent to the serene space of Norfolk University. Professor Désire Baloubi, the Chair of the Department English and Foreign Languages played host to the participants. He and his University rolled out the drums and the red carpet for what has become a memorable event. He was able to bring people like Professor Bernth Lindfors who is considered as a longstanding and renowned scholar and critic of African literature. Lindfors demonstrates vividly the pervasive influence Achebe’s early writing had not only on fellow Nigerian authors but also on teachers and critics of African literature both on the continent and abroad.” I recall making an entry in my diary after the event and I make bold to share how I felt with you:

“This time last week (October 4th to 6th 2018) in faraway Norfolk, Virginia, all my ears heard were three words; “Things Fall Apart” and then the name of the man from Ogidi was written everywhere, his picture was on shirts, on screens and real-printed-out pictures, not just digital images. We were treated to recordings of his voice and the sound came through as if he was in a near-by room. Pa Chinua Achebe had friends and his friends have bigger bags of tales to tell about him. One man told of how he visited him at his home and enjoyed the company of his tales, another told us of Achebe’s dying moments and how glad he was to share such moments with his loved ones and yet another told us of how he sent Achebe a copy of a translation of TFA in Igbo that after reading the translation, Pa Achebe asked his publishers to withdraw the permission granted prior. The other Igbo Translation we were shown by professor Emenyonu did not bother to seek Achebe’s permission neither did Prof Emenyonu bother to share the translation with Achebe! As I reflect over the past week and all I gained about Chinua Achebe, I still cannot understand the nature of the cerebral battles, Wale Ogunyemi, fought to have settled for the title of the Yoruba translation as the life of Okonkwo (Igbesi Aye Okonkwo). I have called up the spirit of Gerald Moore, through his pocket-sized book, “Seven African writers” to come to my rescue. How can Wale Ogunyemi think that the novel Things Fall Apart is about the life of Okonkwo and not about the life of a collective? Is this another case of Saint Paul taking over the New Testament when it should have been about Jesus Christ? Did the character Okonkwo stand in the way of his people? I still cannot understand why Wale Ogunyemi did not see past Okonkwo’s larger than life portrayal by Achebe and allowed the brave warrior’s story seduce him that much!

Yes, Okonkwo fought a battle on behalf of his people and he died “for them” even if the gods of that land rejected his way of leave-taking. Only strangers were allowed to touch his cold dead body. Are our warriors still like Okonkwo? Will they commit ‘death’ for the sake of that which they believe even if their friends and followers look the other way? Should any human being take his or her own life?

Let me leave you with Gerald Moore (1962) “Achebe has, as it were, gone back to that bleak little paragraph of despised and garbled history. With love, with understanding and with justice he has drawn from it a story of people just as real and individual as ourselves, whose world had its own completeness and whose life its own dignity (pg. 65).”

Now fast forward to October 22 2020, the celebration of Achebe moved to one of the predominantly white colleges in the South. This time, the Center for African studies, University of Florida, under the Directorship of Professor Brenda Chalfin decided to commemorate the “40th anniversary of Baldwin and Achebe’s first historic encounter at the University of Florida, the two-day event invited returns and reflections. The first day was set aside to probe the experiential archive through oral history, memoir, and artifact. The second day was a time for literary engagement around reading, representing and writing the nexus of Africa and America in the present on the UF campus and across the community.”

Here is a comprehensive background to the event:

“In April 1980 renowned African writer Chinua Achebe and African American literary giant, James Baldwin met for the first time in Gainesville, Florida. The occasion was the African Literature Association conference devoted to the African Aesthetic. This was an historic event on many fronts, not least of which was the hijacking of the Public Address system during the plenary. Racist invective was met by poetry as Cameroonian writer and composer Francis Bebey stood up to recite Aime Cesaire’s lines “My heart, do not make of me this man of hatred for whom I feel only hatred …” The audience stunned, Baldwin continues “Whoever you are, it no longer matters what you think. The doctrine of white supremacy on which the Western world is based has had its hour — has had its day! It’s over!”

Forty years hence, what does this encounter of Africa and America, US South and Global South, hate and genius, art and violence, portend for the literary imagination? Where are these words and memories lodged? How might we come to know and narrate this past in its midst and from afar. Does a Black Aesthetic today displace the pursuit of an African one?  Can there ever be a single voice to speak with or against? Does not a literary imagination forged in displacement and diaspora transcend attempts at localization? What are the artistic and political stakes and do they recall or refute the promises of the past?”

The background provided the canvass on which the two-day event was set. Participants from the comfort of their homes spoke about the two men and what each stood for in literary production and social justice issues. The list of scholars who graced the event only speaks to the seriousness of the epochal event. Eileen Julien, Professor of Literature, Indiana University;  Naana Banyiwa Horne, Emeritus Professor of English, Santa Fe College;  Aliko Songolo, Professor Emeritus, French & African Cultural Studies, University of Wisconsin-Madison, and Dorothy Randall Tsuruta, Professor of African Studies, San Francisco State University. Also on the different screens was Okey Ndibe, listed as a Visiting Writer-In-Residence, Center for African Studies, UF; Julie Iromuanya, Assistant Professor, Department of English, University of Chicago; E. Stanley Richardson, Alachua County Poet Laureate. If you scrutinize the list above, you may notice the names of scholars who knew James Baldwin personally and those like Okey Ndibe who worked directly with Chinua Achebe for years. Ndibe brought his eyewitness account of the man to the event.

It was not an event designed only for the established scholars and writers, graduate students had a field day. The impressive list included Yewande Addie, MPH, Ph.D Candidate, College of Journalism & Communications;  Mustapha Mohammed, Ph.D Candidate, Department of Anthropology; Romy Rajan, Ph.D Student, Department of English, UF, and La-Toya Scott, Ph.D Student, Department of English, UF. The star of this session in my opinion was Mustapha Mohammed. He not only spoke my mind but also hit the nail on its head several times. He spoke eloquently about the place of Blacks in an institution such as the University of Florida. If it was a live audience Mustapha would have had a standing ovation for his audacity.

James Baldwin came alive in a way I have never known him. The man who started writing at age 11 and did so until his death. Achebe and Baldwin stand in contrast to what Blackness connotes and how, with talent one can stand in the gap for a people. They wrote about the conditions of their people in a way that brought the grave conditions to the attention of all. The situation is not much different today but they are not forgotten. Their works shall live in our memory for long!

Breaking down fear in the scariest season of a dark 2020

Why Netflix is a lifeline for African film-makers

This world-renowned Gambian musician is building an academy...

Egypt tells Elon Musk its pyramids were not...